Last week, the MPAA hosted a special screening of Fox Searchlight Pictures’ A United Kingdom. The film tells the true story of Seretse Khama, a Botswanan Prince, and Ruth Williams, a white British woman in the late 1940s, whose extraordinary love survived pressure from Botswana, the imperial British government, and the apartheid government of South Africa to change the course of a nation. 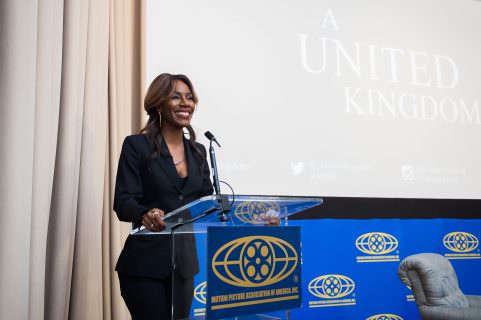 Director Amma Asante brings A United Kingdom to life, drawing powerful performances from the cast, including David Oyelowo as Seretse and Rosamund Pike as Ruth. This film is Asante’s third feature, following A Way of Life and Belle. A native of London and daughter of immigrants from Ghana, Asante brings her personal perspective to her films to reach audiences in a way that truly resonates.

“With A United Kingdom, Ms. Asante takes us back in time and to foreign continents,” said MPAA Chairman and CEO Senator Chris Dodd. “But the story she tells – one of great love that against all odds can change perceptions and alter outlooks – is just as powerful today.”

Following the screening of A United Kingdom, attendees had the opportunity to hear directly from Asante during a Q&A session. Watch a clip from this discussion here: