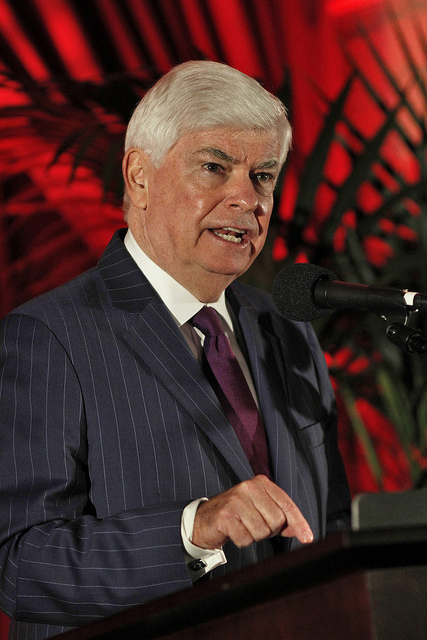 When Warner Bros. released “The Fugitive” into Chinese cinemas in 1994, it was an historic moment. For fifty years, beginning in 1949, no American film had been shown in one of the world’s largest countries. Then, all of a sudden, two iconic American actors were chasing one another across Chinese theater screens and neither of our countries, nor our film industries, has been the same since.

The relationship between the American and Chinese film industries is a strong one.  And since becoming Chairman and CEO of the Motion Picture Association of America four years ago I have made it a major goal to strengthen, and wherever possible expand, this important relationship.

I was truly honored last night to receive the US-China Policy Foundation’s Global Leadership Award for my efforts to build on and strengthen the cooperation and friendship between the United States and China.

Today, twenty years after the release of “The Fugitive,” China stands as the world’s second-largest film market. Over the last five years, the market grew nearly 300% and is on track to reach a record $5 billion by the end of 2014. In China, exhibitors are building an average of 15 screens per day in order to meet the demand of audiences that are devouring foreign and domestic film content in record numbers. The country’s screen count is expected to reach 23,000 by the beginning of 2015. In addition, Chinese filmmakers are creating some of the world’s most innovative and groundbreaking creative works.

At the MPAA we are constantly seeking new ways of supporting and promoting the growth of the Chinese film industry: film workshops at the Shanghai and Beijing Film Festivals; an exchange program for young Chinese filmmakers at one of the MPAA’s member studios; our annual week-long China Co-Production Film Screenings in Los Angeles where filmmakers screen several Chinese co-productions; as well as the co-founding of the annual Asia Pacific Screen Awards to recognize the region’s tremendous talent including many from China’s film community.

These efforts are certainly good for business, but they are important on an entirely different level as well. They allow our creators to work together, share knowledge, and learn from one another; and they allow our two peoples to know each other better.

And the strength of our relationship will be vitally important in the coming days as we work together to face serious issues, such as trade, internet governance, digital privacy, energy resources and so many others. Important issues like these – the resolutions of which will be felt across the globe – have a greater chance of success if we can build trust and confidence and, through film, become more familiar with each other. For it is through the art of storytelling in films and television that average every-day people in our two countries can become more familiar with each other.

I believe wholeheartedly that the United States and China have benefited greatly from the mutual exchange of stories and culture which has occurred since the mid-1990s.

There is no denying that important differences remain between our two nations. We have not always seen eye-to-eye on important issues, and we will undoubtedly continue to disagree from time to time. There is nothing wrong with that, as long as we remain open and willing to work together to resolve those differences. And I believe one of the keys to ensuring that continued and open dialogue is the exchange of creative and cultural content such as films and television