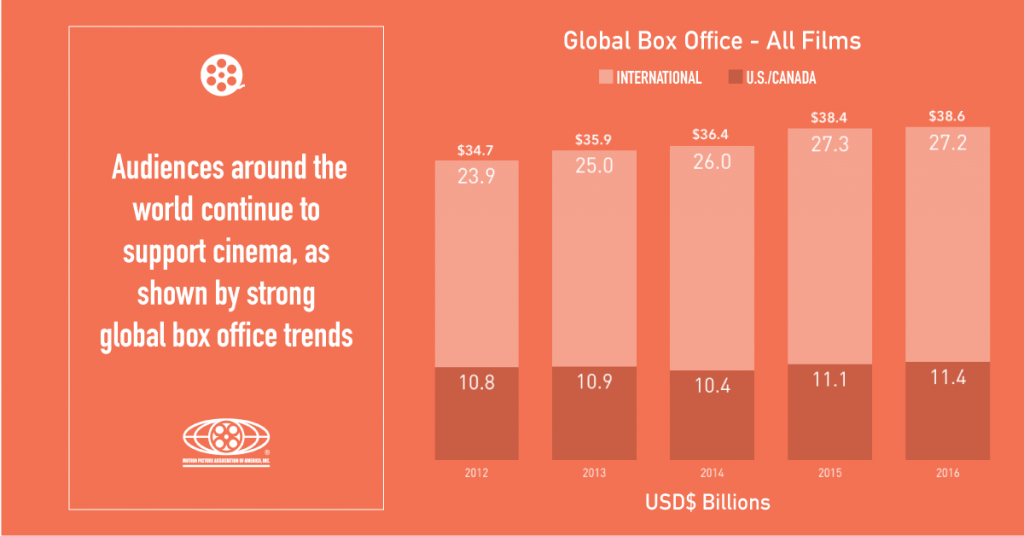 Yesterday, the Motion Picture Association of America (MPAA) released the 2016 Theatrical Market Statistics Report. In this annual report, the global box office showed continued strength in 2016, rising one percent over last year’s record-breaking figures to reach a new high of $38.6 billion. In the United States and Canada, the box office improved two percent to hit $11.4 billion, while the international box office held steady from 2015 at $27.2 billion.

These numbers provide a broad measure of the state of the global film industry. They indicate overall results, but alone, they do not tell a complete story.

When compiling data for this annual global report, the MPAA aggregates box office numbers from nearly 100 countries around the world. To analyze and produce global and regional numbers that represent the value of a diverse, global industry in so many local markets with differing currencies requires a common denominator. In this report, that denominator is the U.S. dollar.

That means from year to year, the relative strength or weakness of the dollar may directly impact the results of this report, particularly if there are unusual changes.

In 2016, because the U.S. dollar showed increasing strength – with currencies of major box office markets depreciating notably against the dollar, including the Chinese Yuan (-6%), British Pound (-12%), the Mexican Peso (-15%) and Russian Ruble (-9%) – when measured in U.S. dollars, some local box office growth was reduced or even translated to a decline. This affected the international total as noted in the report.

In fact, of the top 15 film markets, all but Germany increased in local currency last year. In virtually all of the world’s largest box office markets – including China, Japan, India, the United Kingdom, France and Mexico, among others – 2016 was a positive year for box office growth.

Today’s global film market is expansive and diverse. The annual Theatrical Market Statistics Report is our best attempt at establishing a uniform standard by which to benchmark progress globally. However, it may not perfectly capture an individual market’s complexity or overall movie trends.

In conclusion, while a broad view of 2016 may suggest a static international number, a closer look at the major international markets reflects a local vibrancy that contributes to a strong and growing global industry.