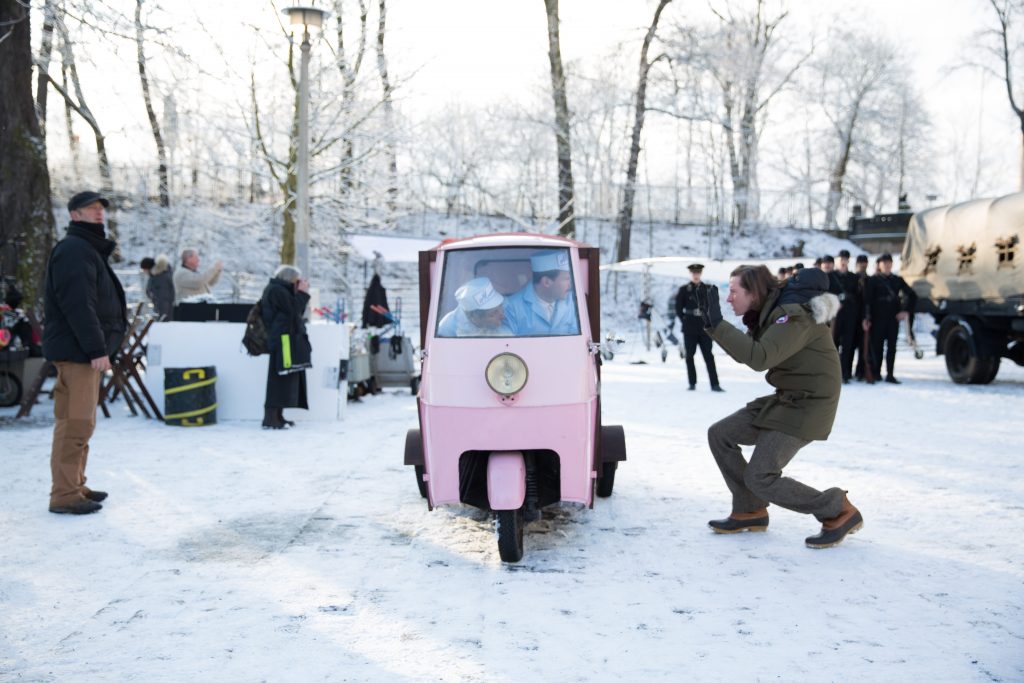 In Brussels this week, I’ve enjoyed talking with government and industry leaders about the enduring importance of filmmaking, both in terms of its artistic and cultural value, and in terms of the economic growth and jobs created and supported.  More than 7 million people throughout the European Union work in creative industries like film and television, generating over 500 billion euro.

Another important part of that discussion focused on the incredible relationships and partnerships between Europe and the United States that already exist in our filmmaking communities, and the need for us to work more closely together to help ensure that during this time of rapid technological and economic change that the very art, culture and economic growth that we so value is not undermined.

Last night, I had the pleasure of speaking before an audience gathered for a special screening of “Lust for Life,” Warner Bros.’ recently restored 1956 film, about Vincent van Gogh.  The event was sponsored by the Motion Picture Association, Cinematek and Warner Bros. and the audience included officials from the U.S. Embassy, representatives of various European institutions and members of Europe’s creative community.

As I told those in attendance, what made “Lust for Life” so special, beyond the incredible artistry displayed on screen, was the story of its creation.  From the very beginning, Vincente Minnelli, the film’s director, set out to depict van Gogh’s life as accurately as possible, which meant spending months traveling with his cast and crew, filming throughout Europe in many of the very same places that inspired van Gogh’s artistic direction and some of his most beloved works.

That dedication to authenticity paid off in the quality of the final film.  But it also significantly impacted the communities where the filming took place — both at an emotional level and economically, where many locals were hired to be part of the production, including at least one person who had actually known van Gogh while he was alive. It also had a tremendous impact on the relationship between American and European creators as they worked together to tell this historic artist’s story.

These types of on-location shoots and international co-productions may not have been common while Minnelli was filming in 1955, but they have become standard practice today.  One need only look at some of the most recent creations that have come from partnership between American and European creators: films like Wes Anderson’s “The Grand Budapest Hotel,” Martin Scorsese’s “Gangs of New York,” and such upcoming films as Ron Howard’s “Heart of the Sea.”

American artists and creators continue seeking out opportunities to collaborate with their European counterparts because this continent’s filmmakers have been vital to making this art form the powerful cultural and social tool that it is today. And European cinema continues to stand out as one of the world’s most creative powerhouses, producing sought after films for markets all across the globe. And with films like “Ida,” “Amour,” “The White Ribbon,” and “Two Days One Night,” Europe’s creators continue to rule the international film festival circuit.

Each of the hundreds of films created every single year is a work of art. They have the ability to entertain us; to make us laugh or cry; and to make us think of important social and cultural issues in a new light. Each one is also a colossal, complex undertaking that requires the hard work and contributions of hundreds of creators, performers, producers, distributors, financiers, and investors in order to come to life on cinema screens.

As they exist today, the certainty of intellectual property rights and the freedom to contract form the bedrock that allows creators and their business partners the freedom they need to tell the stories they want to tell in the ways they want to tell them.  They also support filmmakers’ ability to secure the financing necessary to continue creating and investing in new films all the while also protecting these works of art and those who create them from people seeking to steal and profit from them.

So the message I have been delivering during my very friendly conversations here in Brussels is the same that I have been delivering to leaders all across the world for some time now.  All of us who care about these creative sectors and the people whose livelihoods depend on them must join together to protect and support them. We must ensure that the protections that have allowed these industries to not only exist, but thrive, continue to nurture the creativity and innovation that have been the foundation of this creative sector.

And though technological innovations continue to advance at lightning speed, we must be very careful and cautious before even considering changes to the laws that these creative industries have come to rely on, lest unintended consequences harm the ability of this important form of art, and those who practice it around the world, to continue producing such wonderful and beloved content.

Pictured Above: A behind the scene’s shot from Fox Searchlight’s “The Grand Budapest Hotel.”