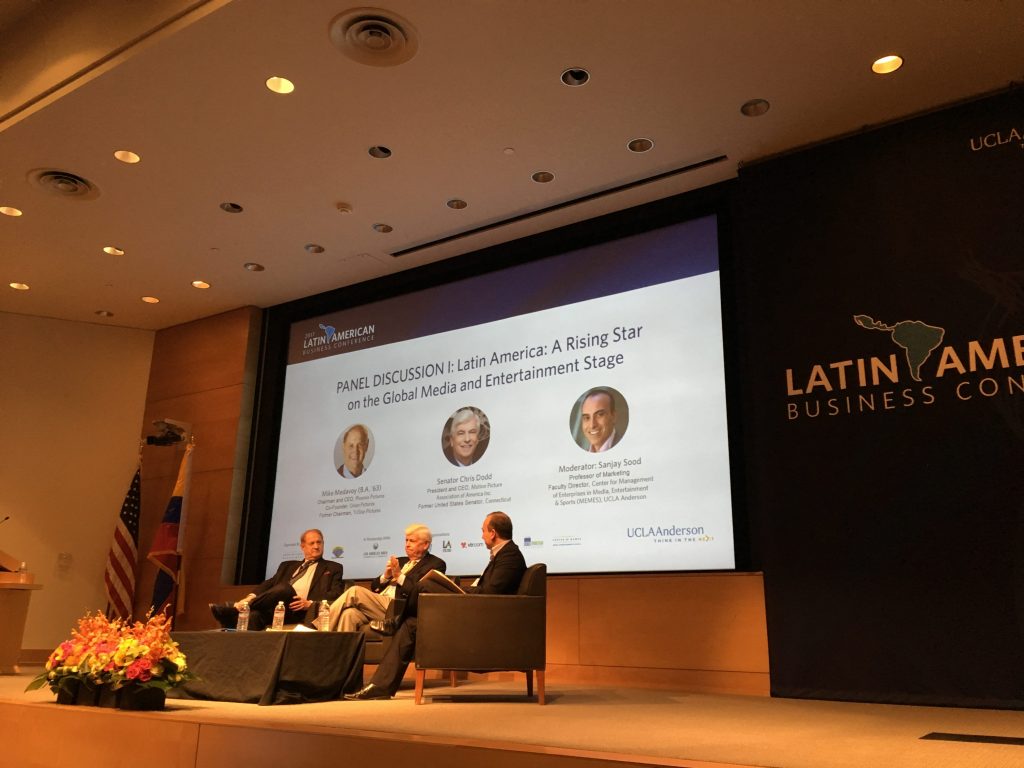 Latin America: A Rising Star on the Entertainment Stage

Today, I had the privilege of participating in UCLA Anderson School of Management’s 2017 Latin American Business Conference: “Latin America: From Uncertainty to Opportunity.”

I was joined by my dear friend, Mike Medavoy – Chairman and CEO of Phoenix Pictures, Co-Founder of Orion Pictures, and Former Chairman of TriStar Pictures – for a panel discussion on the many opportunities ahead for Latin America’s creative industries.

Indeed, Latin America is a tremendously important region for the global film and television industry. Since 2011, the region’s box office has expanded by a full 31 percent to reach $3.4 billion in 2015. In countries like Mexico, film and television added 13.8 billion pesos – or $743 million USD – to the economy, while supporting thousands of local jobs.

But what is especially exciting about this growth, is that it’s spread across the region. In countries such as Colombia, Costa Rica, Paraguay, Honduras, El Salvador, and Chile, box office revenue and theater attendance is now increasing anywhere from 20 to 60 percent.

And here in the United States, we’re also experiencing Latin America’s growing influence on film and television. In recent years, there has been an increase in storylines – One Day at a Time, to name the most recent example – that feature Latino talent and depict everyday life within the Latino community. We have also seen the rise of the telenovela, with shows like Telemundo’s Spanish-language hit La Reina del Sur, the CW’s Jane the Virgin, and USA Network’s Queen of the South.

Of course, the region’s growth is not without its challenges. As technology enables the dissemination of more content to more people in more places, creators face a greater risk of seeing their works stolen. In Latin America, piracy remains a significant issue.

Fortunately, our industry is taking action. We are working tirelessly to create new distribution services that make more films and television shows legally available in affordable ways. We are also partnering with local governments and independent organizations, such as the Mexican Film Commission, to support creative endeavors and the livelihoods of millions of creators.

These efforts are necessary because storytelling – from a diversity of voice, perspectives, and places – helps us better understand ourselves, one another, and the world. Even in uncertain political climates, creative works show us what we all have in common, and by exploring what we all share – universal themes of love and loss, hope and perseverance – break down the barriers that drive us apart.

When creativity is encouraged and protected on a global scale, we all stand to benefit.