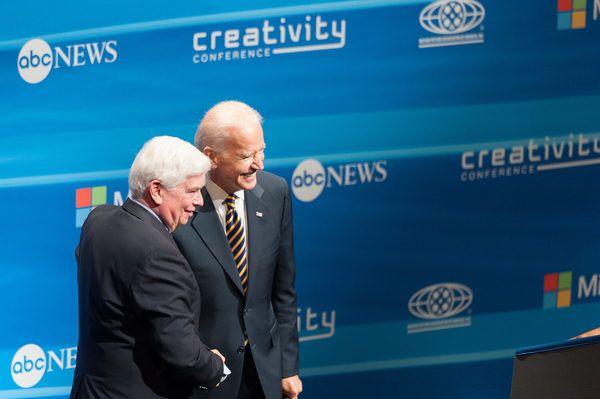 Renowned author and poet Maya Angelou wrote: “You can’t use up creativity. The more you use, the more you have.” With her words as a backdrop, leaders from technology, entertainment, and politics converged at the Newseum on Friday, May 2 to kick off White House Correspondents’ Dinner weekend with a substantive program using creativity as the centerpiece. The Motion Picture Association of America, partnering with Microsoft and ABC News, played host to the second annual Creativity Conference, which explored the important nexus between content and technology and examined the role creativity and innovation play in our global economy.

The second annual Creativity Conference was a celebration of the impact, and necessity, of the creative community on the economic stability and cultural legacy of America.  “Year after year, audiences go to their local cinemas or sign up for streaming services to see what our industry has to offer,” Senator Dodd, chairman and CEO of the Motion Picture Association of America said. “Our industries are far more than just creators of entertainment…the creative community contributes 3.2% to our GDP.” Senator Dodd and the MPAA presented the conference with Microsoft and ABC News, convening leaders in the entertainment, business, media, technology and political communities to talk about the current state and the future of the industry.

Here’s a selection of quotes and images from the conference, which drew hundreds to the Newseum in Washington DC. The space was studded with props from Sony Pictures Entertainment’s The Amazing Spider-Man 2, a Minion from Universal PicturesDespicable Me 2, the Iron Throne from HBO’s Game of Thrones, and a live makeover of a young man into a werewolf by makeup artist Tyler Green. 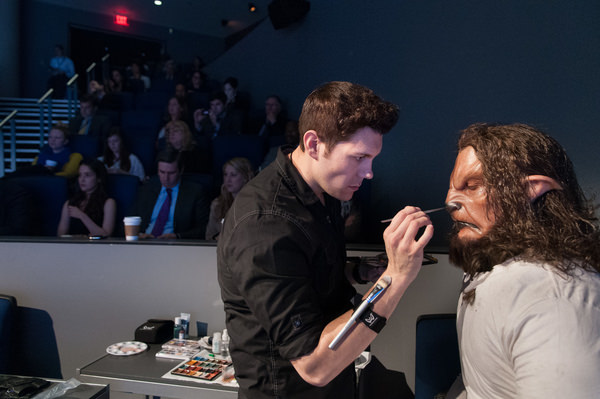 Tyler Green goes to work on transforming his brother into a werewolf. Photo by Ralph Alswang.

Jonathan Karl, chief White House Correspondent for ABC News, asked House judiciary chairman Bob Goodlatte how realistic Netflix’s juggernaut original series House of Cards is. Representative Goodlatte laughed, assuring the audience there was no one quite as ruthless as Kevin Spacey’s Frank Underwood. Goodlatte did have more to say about the importance of protecting the creative industry, explaining that it was crucial for consumers to understand that paying for content is an investment in films and television shows of the future. “If you don’t reward the creators, you’re not going to get creativity,” he said. 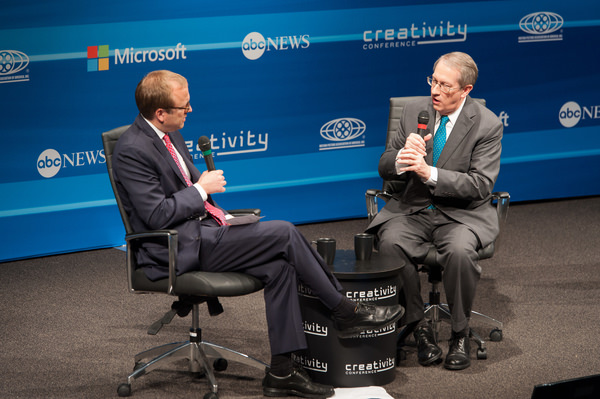 When asked which show or film offered the most realistic portrayal of Washington, Goodlatte deadpanned, “C-Span.” 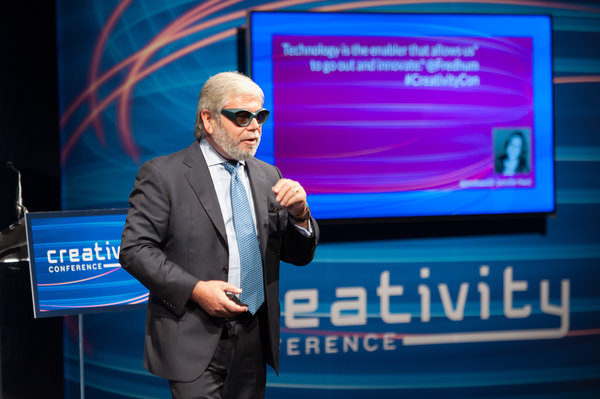 Avi N. Reichental wearing bespoke glasses that fit the exact measurements of his face thanks to 3D printing. Photo by Ralph Alswang.

Avi N. Reichental on the Future of 3D Printing

One point Senator Dodd made early on in the conference was that the motion picture industry is not just an entertainment business, but a technology business as well. Filmmakers and film studios invest heavily in technology, and also function as major driving forces in technological innovation. Look at films like Gravity, which required bespoke technology that didn’t exist to capture Alfonso Cuarón’s game changing film.

Avi N. Reichental, the president and chief executive officer of 3D printing company 3D Systems, is a man who appreciates such leaps in technology. Reichental spoke passionately about the incredible advances in myriad fields that 3D printing is ushering in, from medical equipment to jet engines. Reichental believes that eventually 3D printing will go from the realm of the merely tactile to the digestible, imagining a future in which 3D printing will include food. 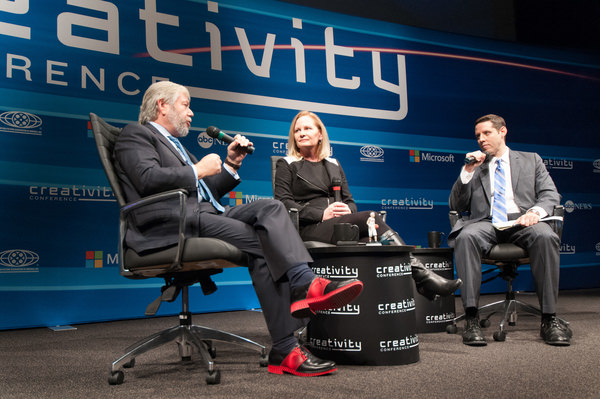 If that sounds impossibly far out, things got even more theoretically ambitious when Reichental joined Mary Czerwinski, principal researcher for Microsoft Research, to talk about whether the sentient technology at the center of Spike Jonze’s fantastic Her could become a reality. Asked by moderator Rick Klein, political director of ABC News, what year they believed Her was set in, Czerwinski guessed 2020, while Reichental said 2018.

Czerwinski said that achieving the full range of emotions Samantha (voiced by Scarlett Johannson) is capable of in Her is going to take a little longer than 2020, but Reichental says that while replicating emotions is the hardest part of creating a true artificial intelligence, it’s not impossible. “The ability to read, record and interpret facial expressions and gesturing, all that sensing and camera technology is developing very, very rapidly,” he says. “If you infuse that with A.I., you begin to learn how to mimic emotions.”

Czerwinski says the devices are going to become more sentient in the coming years, and eventually we’ll have devices that form a partnership with us, very much like Samantha in Her. What interests Czerwinski is a system that makes individuals more aware of their emotions rather than focus solely on a computer, program or robot that’s able to mimic human emotions. “The really important problem is to teach you ways and tools to get over your own feelings if they’re not healthy for you,” she says. “That’s a really exciting frontier.”

Reichental believes that in the next decade, each of us will have a robotic companion that will take care of us from the time we’re born until we die. “You’ll have this incredible companion that will tell you everything you need to know, it will nurture you, deescalate you, to the point where you might not wish to have real human interactions,” he cautions. While warning about these unintended consequences, he also believes that eventually we might be able to replicate our own organs, like replacement parts, which some companies have already begun to work on. 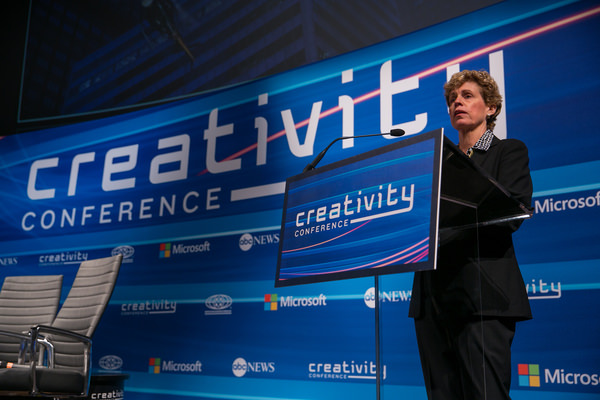 Lisa Rawlins of Warner Bros. talks about the studio’s long-standing history with filming in Chicago. Photo by Ralph Alswang.

The Economic Impact of Creativity

Lisa Rawlins, senior vice president of Public Affairs at Warner Bros. Entertainment, talked about the studios long history of production in Chicago. In 2013, Warner Bros. spent over $107 million in the city, with a huge chunk of that coming from the production of the upcoming Jupiter Rising.

The total production of Andy and Lana Wachowski’s epic sci-fi adventure film included 102 days of pre-production, 49 days of shooting, another 49 strike days (breaking down the set, returning rentals, etc.) and more than 1,180 members of the crew. One sequence alone took 13 straight days of early morning shooting involving helicopters flying low over the Chicago River, which required close to 200 people to help lock up or close streets downtown.

Sean Bailey, president of Walt Disney Studios Motion Picture Production, spoke about the importance of asking the one question that must be answered in the affirmative before he green lights any potential project—will the story move people?

Looking at how the American film industry creates global content, Bailey explained that the central themes that have been a huge part of the film industry’s DNA—hope, optimism, family and courage—have made such an impact on the global community that we’re currently living in an age where filmmakers from the Far East to South America have adopted these core values and made their own incredible films in this vein. He cited Alfonso Cuarón, who became the first Latin American director to win a Best Director Oscar for his visually stunning, emotionally riveting film Gravity. “These core values, combined with technological advancement and a more global mindset, leads to a really exciting time,” Bailey said.

Looking at Disney’s upcoming, hotly anticipated Maleficent, starring Angelina Jolie, Bailey said that the challenge was looking at the rich history of his company’s titles and finding a creatively compelling way to refashion them. “How do we do something that’s going to excite us and the creative community?” he asked. For Maleficent, Bailey said Disney wanted to take one of the most iconic villains of all time and ask what her story was, explaining that much of Disney’s historic tales have been told from the hero’s point of view. “With Maleficent, we asked what happened to this character that made her want to curse that poor baby,” he said.

When asked about filming in America, Bailey recalled being a producer on Ben Affleck’sGone Baby Gone, a film shot on location in Boston. “Ben was adamant on filming it in Boston,” he said, “and it made the movie better, it was real, you’re surrounded by people in the region…they help you, they tell you that nobody in South Boston would do that, nobody would wear those pants.” 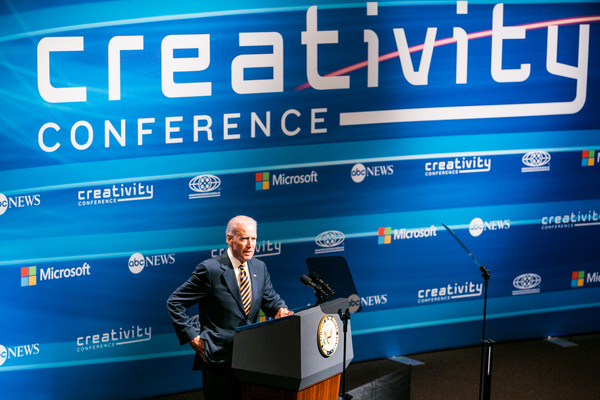 Vice President Biden takes to the stage to discuss the importance of intellectual property and the rights of the creator. Photo by Ralph Aswang.

Vice President Joe Biden took the stage to express his long standing support of intellectual property and protecting the rights and work of creatives. “Where creativity and innovation are expressed, and rewarded, those are the societies that thrive,” Biden said. “Fostering innovation is not just about crafting the right economic policy or curriculum, it’s about establishing and protecting a climate where it can flourish.”

Vice President Biden explained that some 44 million Americans work for companies that export goods, as the motion picture industry does, and that jobs supported by exports pay as much as 18% higher wages than the national averages. When it comes to protecting our creators and makers, Biden said the stakes are much more than simple economics. “People in the entertainment industry understand that the face of America isn’t the diplomat or president or vice president, it’s our businesses and our culture, and your movies speak a lot more to the world than every single diplomat or vice president or president ever could,” he said. “Along with our musicians, athletes, and writers, you are the face of our culture to the rest of the world, and that’s a pretty awesome responsibility.”

This post was originally posted on our content site TheCredits.org and can be read in its original format here.