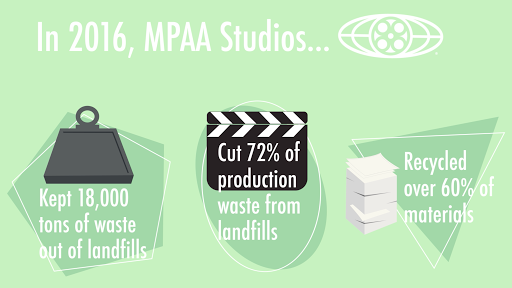 As we prepare to celebrate Earth Day, the MPAA released new data on the Solid Waste Task Force, a joint program between the MPAA and the Alliance of Motion Picture and Television Producers, efforts to protect the environment. MPAA studios – Disney, NBC Universal, Paramount, Sony Pictures Entertainment, Twentieth Century Fox, and Warner Bros. Entertainment – work year round to raise global awareness about the importance of sustaining our environment, while also bringing innovative and green-friendly policies to practice every day.

The 2016 numbers are impressive:

MPAA studios are working each and every day to conserve energy, reduce waste, and raise awareness about preservation. They are on the cutting-edge of incorporating eco-friendly values into everyday practices. Each studio individually and voluntarily takes on a wide range of eco-friendly initiatives throughout the year – and their efforts yield positive results.

A new MPAA fact sheet looks at each studio’s programs and campaigns. From educating filmmakers and crew members on sustainable best practices, offering excess food to those in need, and donating sets for reuse, the MPAA member studios are doing their part to protect the environment.

Earth Day reminds us to do our best to protect our planet to ensure a bright future. The film and television industry embraces this mission year round.