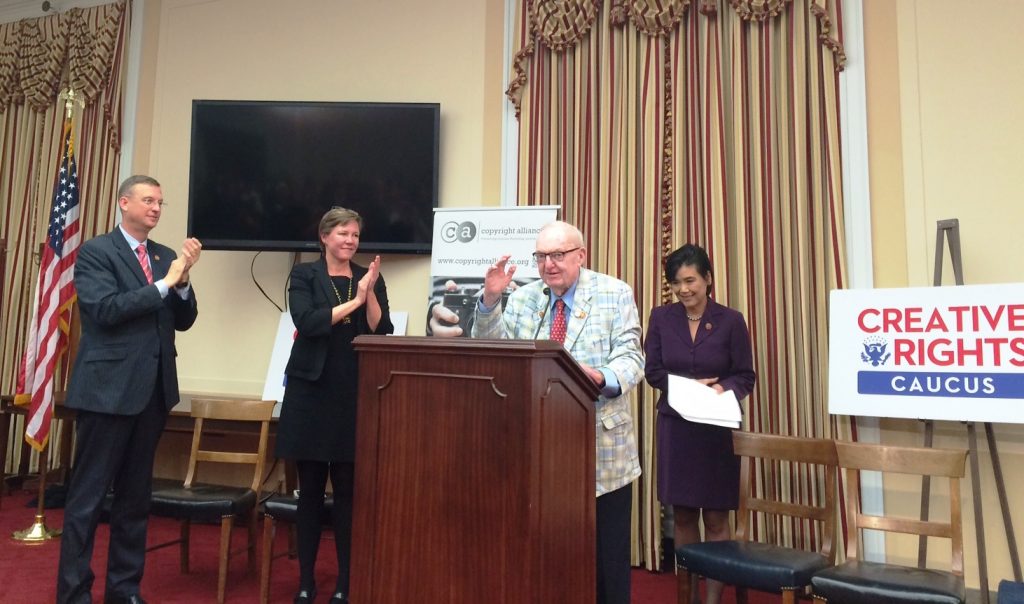 On Monday, Members of Congress, friends, and creative industry members joined the Creative Rights Caucus and its co-chair, Representative Judy Chu, at a Capitol Hill reception to pay tribute to Representative Howard Coble as his 30-year congressional career winds down.

At every legislative turn, Representative Coble has been a stalwart defender of artists and members of the creative community. In 1998, Coble authored the “Sonny Bono Copyright Extension Act” and introduced another crucial piece of legislation, the “Digital Millennium Copyright Act (DMCA).” More recently, Coble played a critical role in the passage of the 2008 “PRO-IP Act.” Coble also co-founded the Creative Rights Caucus with Representative Judy Chu to recognize and protect the hard work, creativity, and investment of creators and makers. Just this September, Representative Coble helped to honor the economic benefits and technological advancements from creativity at “Beyond the Red Carpet: Movie & TV Magic Day.”

MPAA Chairman and CEO, Senator Chris Dodd, stated, “Throughout his time on Capitol Hill, Representative Coble has been a leading authority and champion for the rights of creators. We are grateful for his service and illustrious career in Congress.”

In addition to celebrating Representative Coble’s career, the reception welcomed Representative Doug Collins into his new role as co-chair of the Creative Rights Caucus, starting in the 114th Congress. Through his work, Representative Collins demonstrates the important role creativity plays in driving economic growth.

In fact, Collin’s home state of Georgia has been a hotbed for movie and television production. In recent years, the state has hosted high-profile productions such as the latest installment of “The Hunger Games” and “The Walking Dead.” The latest data reveals that the industry employs over 23,000 workers and supports over 77,000 jobs that pay $1.6 billion wages.

Senator Dodd added, “The Creative Rights Caucus does a tremendous job safeguarding the rights of the creative community, preserving some of the most productive sectors of our economy like the film and television industry. We look forward to working with Representative Collins to continue protecting creators in this age of rapid digital growth.”

The reception, sponsored by the Copyright Alliance and SoundExchange, featured remarks from Representatives Chu and Coble and a performance by Sleepy Man Banjo Boys.