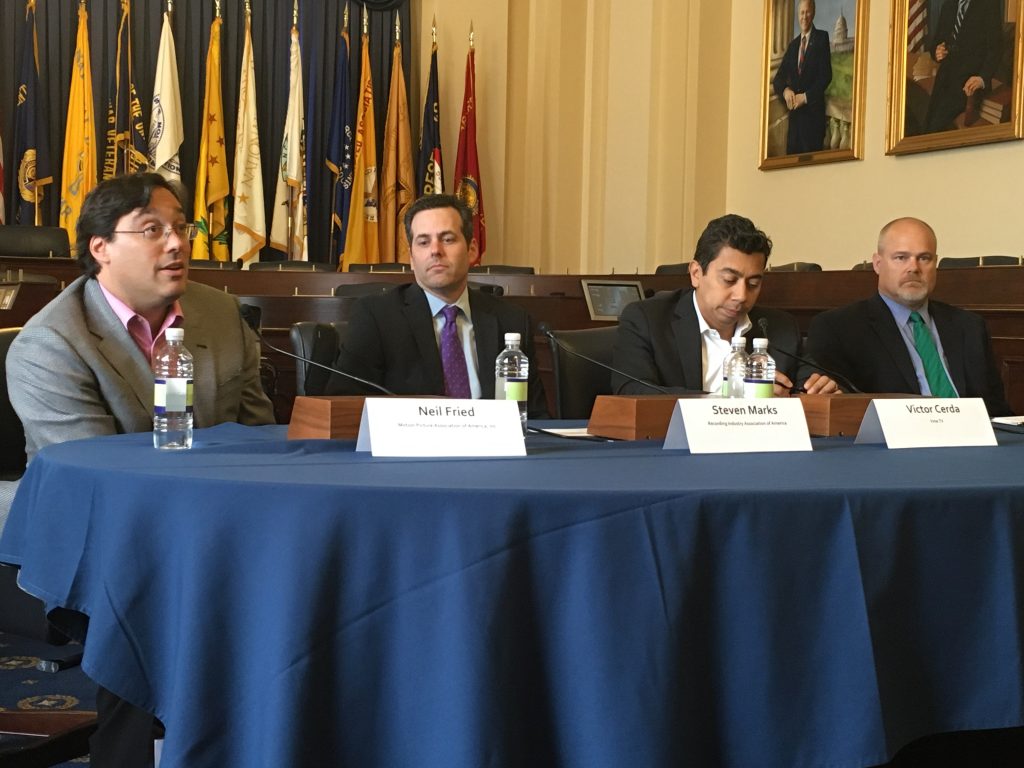 At a panel held in cooperation with the Creative Rights Caucus last week, a diverse group of creative industry representatives voiced their concerns with the FCC’s set-top box proposal to a packed crowd of congressional staffers on Capitol Hill.

The panelists – representing Vme Media, IATSE, the MPAA, and the RIAA – set the record straight on why a broad array of creative industry stakeholders have raised concerns about the potential unintended impact the proposed regulation will have on the millions of Americans who make a living in the film, television, and music industries. Here’s what they were saying:

On the FCC’s contention that the proposal is about lowering set-top box fees for consumers:

“I want to call to your attention that not one person on this panel gets set-top box fees – none of us are in the set-top box business. But in the cause of promoting set-top box competition, the FCC has chosen a mechanism that runs roughshod over copyright, content security and the business models that lead to great content creation.” – Neil Fried, senior vice president, government & regulatory affairs, Motion Picture Association of America, Inc.

On the impact of the proposal on minority programmers:

“Through this rule I have to provide my content and my original productions for free to very large non-independent, non-minority companies so that they can then sell it. And in this instance I’m dealing with some titans of the world of technology – the Googles of the world… With respect to minority programmers, where our market is smaller, where I have to fight hard for an ad-spend that is much smaller, the negative impact will be felt two or three times as much as the rest of the industry.” – Victor Cerda, senior vice president, corporate strategy, Vme Media

On the concerns of creative industry workers:

“Our concern is that this rule will undermine decades and decades of hard fought wins in our collective bargaining fights with producers. The nature of the work that our members do is freelance. Really, we’re the original workers in the gig-economy. Through collective bargaining, we’ve created a system [of direct and residual payments] that protects those folks in the freelance, gig-economy workplace. We think the FCC [proposal] undermines this system.” – Alec French, International Alliance of Theatrical Stage Employees

On the music industry’s concerns with the proposal:

“Any market is predicated on contracts and the privity of those contracts. Here, that privity is being stripped…  If you’re producing content of any kind, what incentive are you going to have to put that content into an ecosystem where others can pick it up and use it any-which-way, whether its monetizing it or completely distorting the way you intended it to be available to the consumer.” – Steven Marks, chief, digital business & general counsel, Recording Industry Association of America