Copyright, Competition & and the Dynamic Movie and TV Marketplace

If you love the amazing variety of films and television shows we can enjoy today, you should know that intellectual property helps make this dynamic world of entertainment possible. Look no further than the three charts below for clear evidence of how copyright drives innovation and competition in today’s film and television marketplace. 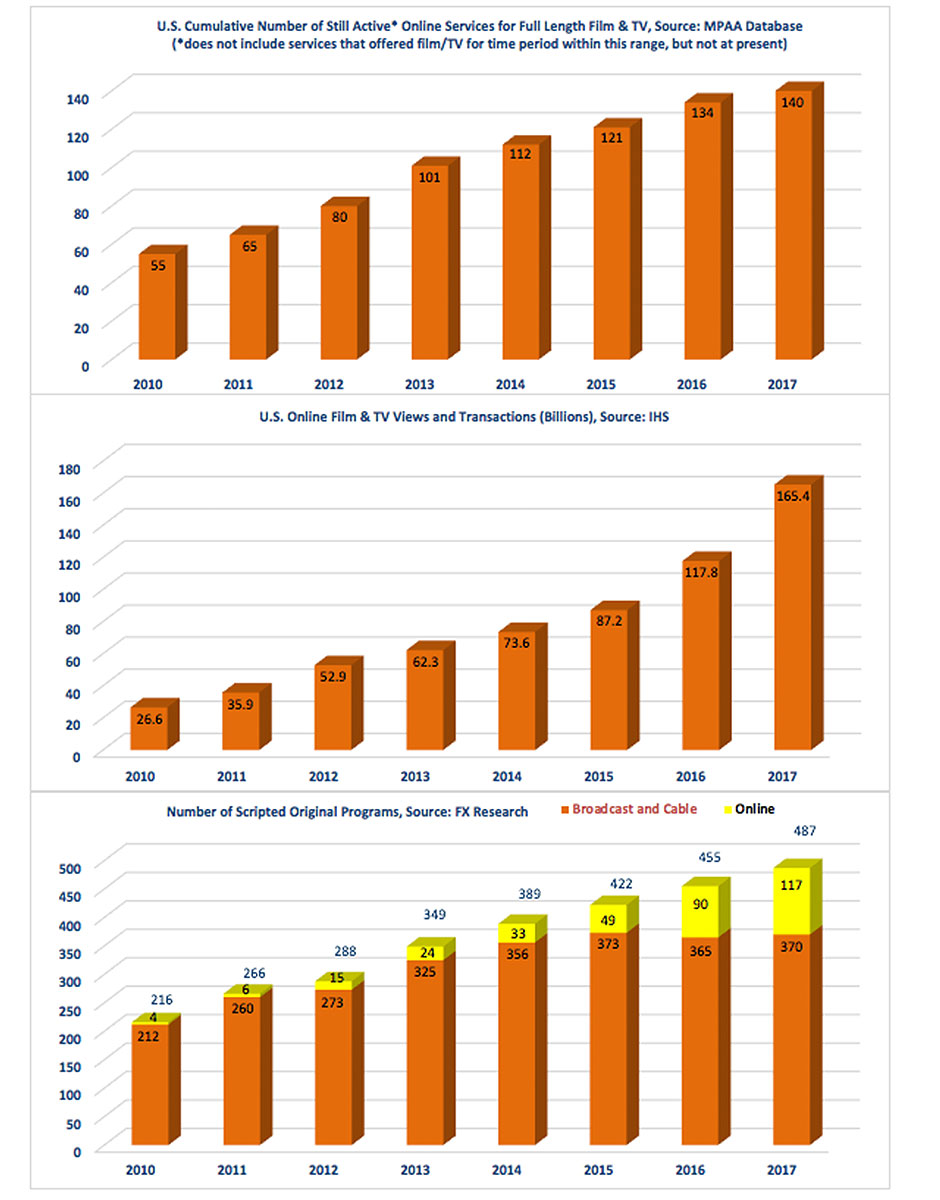 The MPAA included these charts in its filing for the FTC’s hearing Oct. 23-24 on Innovation and Intellectual Property Policy, the fourth in its series on Competition and Consumer Protection in the 21st Century. The charts show that:

Our nation’s respect for intellectual property makes this possible. Indeed, the joint FTC-DOJ Antitrust Guidelines for the Licensing of Intellectual Property have long recognized that copyright promotes innovation and competition by enabling creators to reap the well-earned fruits of their labors, which in turn encourages the production and wide dissemination of content to the ultimate benefit of the public.

However, despite our industry’s embrace of the internet to reach audiences through lawful services, an estimated 542 million pirated movies and TV shows were downloaded in the United States in 2017 using peer-to-peer protocols alone. And streaming piracy is becoming even more prevalent than illicit peer-to-peer downloading, with streaming piracy sites garnering 37 percent of visits to sites with unauthorized content, sites hosting infringing content garnering 36 percent, and peer-to-peer sites garnering 27 percent.

The large-scale availability of pirated content harms investment in the creation of additional innovative and diverse digital content and services. Additionally, as one-third of pirate sites expose users to malware and pirate sites are 28 times more likely to infect users with malware than mainstream websites, the spread of piracy also presents a new vulnerability to cybersecurity and a growing threat of identity theft and other harm to consumers.

While piracy is not a new problem, the situation is compounded today by a lack of accountability on the part of some online platforms for unlawful conduct occurring over their services. Ordinarily, businesses are held legally accountable if they don’t take reasonable steps to combat illegal activity related to their services. Online platforms, however, are largely absolved from such accountability, stemming in large part from liability limits enacted by Congress two decades ago.

It was presumed that the platforms would take voluntary steps to curb abuses, but that has not happened to a sufficient degree. That makes it even more difficult for legitimate businesses, by forcing them to compete with unlawful actors, and also creates an inhospitable environment for individuals to engage in communications, commerce, and creativity.

FTC efforts to crack down on unfair and deceptive practices surrounding piracy and other lawlessness online could help prevent illicit services from stifling investment and competition, thwart cybersecurity threats, and reduce identity theft and fraud stemming from malware. Such actions would thus serve the agency’s dual goals of protecting consumers and promoting lawful competition.

More proactive, voluntary measures by platforms to curb abuse of their services—in collaboration with those impacted by the abuses—could also help protect consumers and promote a safer and more secure internet. MPAA Chairman and CEO Charles Rivkin has discussed these types of efforts in recent letters to the U.S. House and Senate and in remarks before the Technology Policy Institute.

These are important considerations to keep in mind as the FTC reviews the state of competition and consumer protection in the age of an internet dominated by online platforms. The MPAA and its member companies stand ready to discuss shared responsibility with all interested parties, and strongly endorse efforts by the FTC to curb online lawlessness.