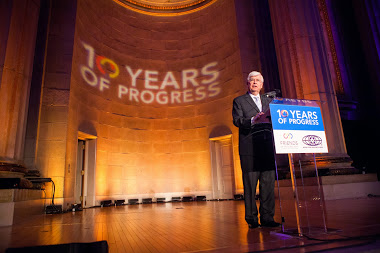 On the heels of World AIDS Day, I had the pleasure Tuesday night of joining the Friends of the Global Fight Against AIDS, Tuberculosis and Malaria to celebrate ten years of remarkable achievements in the fight against HIV/AIDS, as well as honor its co-founder, the legendary Jack Valenti.

Because of the continuing work of groups like Friends of the Global Fight and the Elizabeth Glaser Pediatric AIDS Foundation (on whose board I have the honor of serving), great progress has been made in the continuing fight against HIV/AIDS. Over the past decade, global HIV/AIDS-related deaths have been cut in half and new infections among children have fallen by 52 percent since 2001. I am proud of the contributions that bi-partisan efforts I worked on over the years as a United States Senator have made to this progress. Efforts like the 1990 “Ryan White Care Act,” the “Global Pediatric HIV/AIDS Prevention and Treatment Act,” the “Best Pharmaceuticals for Children Act,” and the President’s Emergency Plan For AIDS Relief (PEPFAR).

Along with the scientific and legislative advances made in treating this disease, we have witnessed a remarkable transformation in society’s treatment of those living with HIV/AIDS. During the earliest years, too little was known and too many were willing to give in to their fear, stigmatizing both the disease and those living with it. And I would argue that the humanizing connections created by popular American films have been a powerful driving force behind this change.

In 1985, only a few years into the epidemic, 34 million Americans tuned in to watch NBC’s landmark made-for-television movie “An Early Frost.” Starring Aidan Quinn, it told the story of the prejudices faced by a successful lawyer living with AIDS who returns home to his parents. 1986’s television adaption of “As Is,” 1989’s “Longtime Companion,” 1993’s “And the Band Played On,” and other productions continued to inform and bring a human character to public discussions about the growing AIDS epidemic.

But perhaps the best known early filmed portrayal of HIV/AIDS would be 1993’s award-winning “Philadelphia,” written by Ron Nyswaner, directed by Jonathan Demme, and starring two of America’s best known actors: Tom Hanks and Denzel Washington. The first mainstream Hollywood film to deal with HIV/AIDS, “Philadelphia” and Hanks’ performance were lauded by both critics and activists for their accurate portrayal of AIDS and the people affected by it. According to Gary Bell, longtime HIV advocate and director of Bebashi, a health service agency in Philadelphia, the film “got people talking about HIV in a way that they really weren’t, because HIV was always that thing we really didn’t want to talk about.”

Despite the great progress, however, a great deal of work remains before we can finally claim victory over HIV/AIDS. Through the stories they bring to life, filmmakers will continue doing their part to keep this ongoing epidemic present in people’s minds. In 2003, Tony Kushner and Mike Nichols brought the Pulitzer Prize-winning play “Angels in America” to audiences as an award-winning HBO mini-series. David France’s “How to Survive a Plague,” which Anthony Fauci, head of the National Institute of Allergy and Infectious Diseases, says everyone should see at least three times, is a powerful documentary chronicling the earliest days of AIDS activism. And films like “Precious” and “Dallas Buyer’s Club” continue to ensure audiences never forget the struggles those living with HIV/AIDS face every day.

The last decade’s commitment to fighting the global HIV/AIDS epidemic has led to some truly remarkable progress and success. It is a cause which has brought together bi-partisan political leaders, members of the creative community, advocates and countless others. And I look forward to continuing to work with all of them and seeing what progress we can accomplish in the years to come.

Pictured Above: Senator Dodd at the 10th anniversary leadership gala of the Friends Of The Global Fight Against AIDS, Tuberculosis and Malaria, December 2, 2014 in Washington, DC.
Photo by Allison Shelley/Getty Images for Friends of the Global Fight