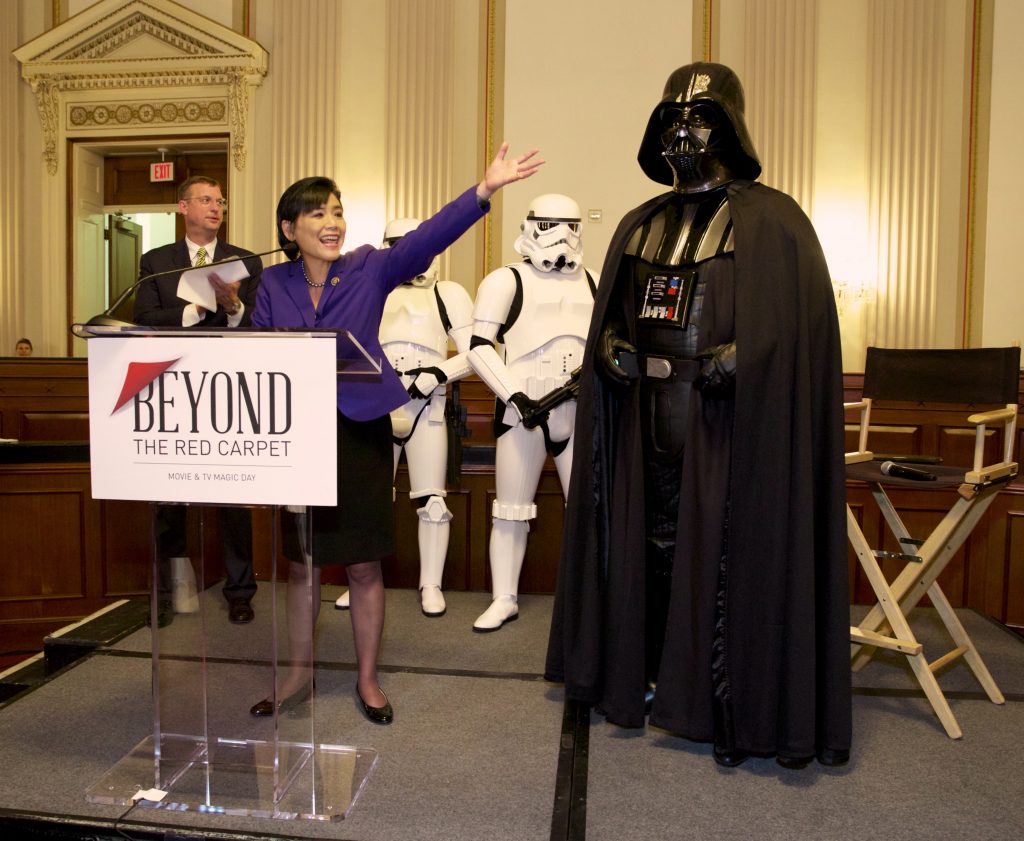 Young adult horror author R.L. Stine (Jack Black) is shouting at you to hang on. You’re in the front seat of his station wagon (and, foolishly, you don’t seem to be buckled in), and you’re swerving all over the road. There’s a very unsettling roar behind you, and Stine tells you to turn around and keep an eye on the thing that’s chasing you. That thing turns out to be a 60-foot tall praying mantis, and you’re being jostled in your seat as Stine jerks the wheel left and right, the colossal mantis trying to turn you into dinner. What’s going on here? Well, you and Stine are in the middle of a thrilling chase scene in Sony Pictures’ upcoming film “Goosebumps.”

This experience was one of many available to attendees at the “Beyond the Red Carpet: Movie & TV Magic Day” event on Capitol Hill last night, which included a series of trade booths and live demonstrations like the fully immersive virtual reality adventure described above. “Beyond The Red Carpet” offered a behind-the-scenes look at the innovation and talent at the heart of the American film and television industry, which supports nearly 2 million jobs.

MPAA Chairman and CEO Senator Dodd touted the event, stating, “The creativity that drives America’s vibrant motion picture and television economic sector was on full display at today’s event. I’d like to thank Representative Judy Chu and Representative Doug Collins for making this event possible and for their continued hard work to protect and promote the rights of creators.”

As Senator Dodd mentioned, the Creative Rights Caucus Co-Chairs Representative Judy Chu and Representative Doug Collins were key in giving more than 500 guests a look at how some of our favorite films and TV shows are made.

Representative Judy Chu said, “For the second year now, I am thrilled to be hosting this event to showcase the creative industries and the many workers behind the scenes that bring entertainment to life and contribute $1.1 trillion to our economy.”

And Representative Doug Collins added, “Beyond the Red Carpet is a chance to showcase the contributions the creative people behind the scenes of the entertainment industry have made to our country.”

Of course, the “Goosebumps” experience, which included a chair that pitched and rolled to the action, was only one of many opportunities for attendees to immerse themselves in the creative process. Twentieth Century Fox and Blue Sky Studio gave a fascinating presentation of their painstaking, impassioned process of turning Charles Schulz’s beloved “Peanuts” comic strip into “The Peanuts Movie” that opens in theaters on November 6. This glimpse into their creative process showed how the illustrators and animators took the graceful, iconic spirit of characters like Charlie Brown, Snoopy, Peppermint Patty and Linus and rendered them in 3D animation. Guests also got a chance to strike a pose as Zoolander, with costumes on hand from Paramount Pictures. Then there was the man who became a werewolf, in real time, thanks to a brilliant makeup artist from NBC’s hit series, “Grimm.”

In addition, the audience was treated to a Q&A session with SAG-AFTRA Actor Iqbal Theba, who played Principal Figgins on Fox’s hit series “Glee” and currently stars in the HBO series “The Brink.”

“SAG-AFTRA is proud to once again join our industry colleagues in showcasing the talent and creativity of those who work behind and in front of the camera to make movie & TV magic,” said SAG-AFTRA President Ken Howard.