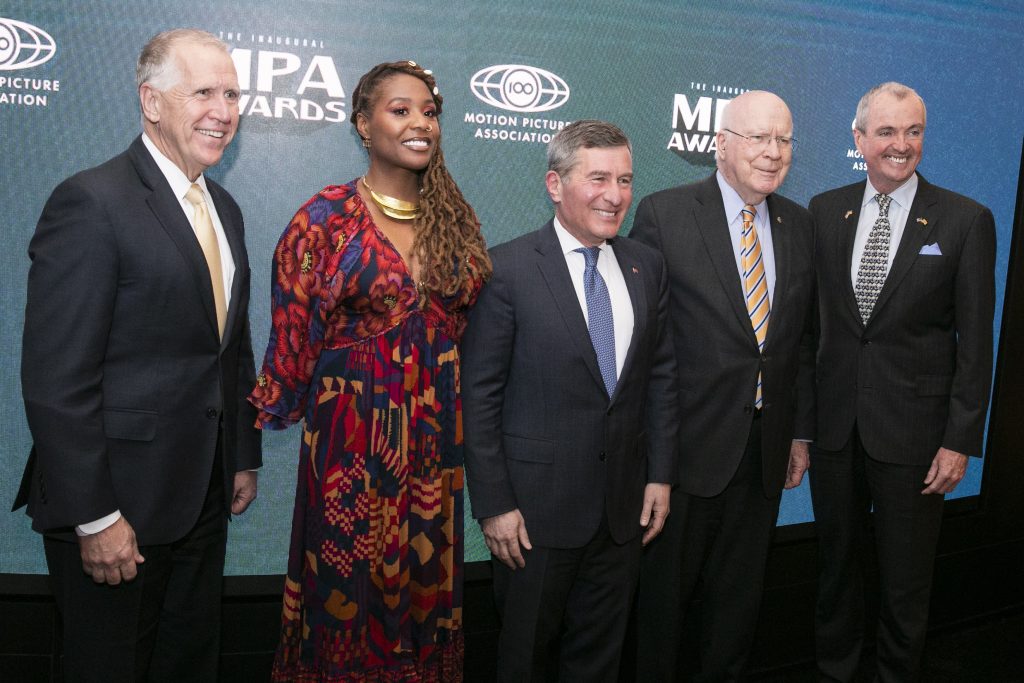 Our inaugural MPA Awards, hosted at the Motion Picture Association’s global headquarters in Washington, DC, honored four individuals from the global policy and creative communities who have made notable contributions to the film, TV and streaming industry.

Filmmaker Nikyatu Jusu – whose feature film debut Nanny won the Grand Jury Prize at the 2022 Sundance Film Festival – received the MPA Creator Award for her expert display of her craft behind the camera and her contributions to moving and shaping culture, helping audiences see the world in a different light. Jusu is an accomplished writer and director who has uniquely transformed the way stories are told in Hollywood – and who tells them.

“I am honored to accept the first-ever MPA Creator Award on behalf of a global community whose work inspires positive change and growth,” Jusu said. “Creators make more than movies. They create jobs. They inspire cultural movements. They generate empathy machines, tackling socially resonant topics in entertaining ways. Being part of this community is among my life’s proudest achievements, and I am grateful to the MPA for shining this spotlight on us all.”

Read our interview with Jusu as she goes behind the scenes of Nanny.

Senator Thom Tillis (R-NC) received the MPA Industry Champion Award for the profound impact he has had on America’s creative industry, including his work to ensure fairness within the American copyright system, to support the contributions the creative community makes to the American economy, and for leading efforts such as the Protecting Lawful Streaming Act (PLSA) to ensure that intellectual property rights have meaning.

“It’s an honor to stand beside Nikyatu Jusu, Governor Phil Murphy, and Senator Patrick Leahy as supporters of America’s creative industry,” Tillis said. “I came to the Senate to find bipartisan solutions to America’s problems, and I am proud to stand up for the rights of the creative community. The industry supports nearly 50,000 jobs in North Carolina and provides more than $1.2 billion in wages. I am proud to have authored a law to make sure that criminal enforcement keeps pace with the cutting edge of piracy and am excited to continue working to support the film, television, and streaming industry’s growth across all 50 states.”

Governor Phil Murphy (D-NJ) also received the MPA Industry Champion Award for expanding film and TV production opportunities in New Jersey, creating local jobs and driving economic growth. In January, the governor signed into law the expansion of the New Jersey Film & Digital Media Tax Credit Program, enhancing the state’s production incentive program. Since its inception in 2018, the program has made New Jersey a national film and television production center and continues to attract high-profile projects to the state.

“I’m grateful to the MPA for highlighting the work we have done to make New Jersey a top destination for some of the country’s most significant TV and film productions,” Murphy said. “Those productions are shovel-ready projects that create good jobs and drive economic growth across the state. I accept the MPA Industry Champion Award on behalf of the 57,000 New Jerseyans whose jobs are supported by the film and TV industry.”

Senator Patrick Leahy (D-VT), a staunch ally of our industry throughout his eight terms in the Senate, received the MPA Lifetime Achievement Award. The award recognizes Leahy, who is retiring from the Senate next year, for his unwavering commitment to intellectual property rights and copyright protection during his distinguished Senate career. His commitment to the industry goes beyond the halls of the Senate – he’s been featured in five Batman movies, serving under four different Caped Crusaders.

“I have always felt that the brilliance of artists and filmmakers deserves protection from those who attempt to unfairly profit off their hard work,” said Leahy. “Individuals at studios go to work every day to create the movies and shows loved by audiences around the world. That is why it has been a pleasure to work throughout my Senate service with the MPA, which represents the most iconic American film and TV studios.”