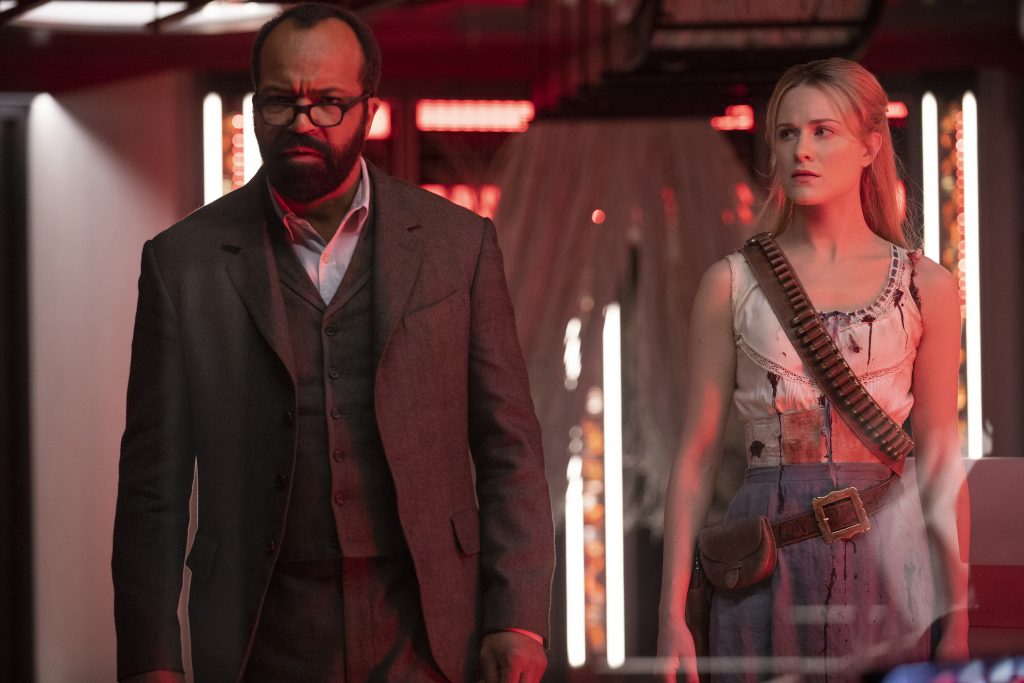 With another bloody, transporting, and revelatory Westworld season finale, showrunners Jonathan Nolan and Lisa Joy left viewers mystified and begging for more. The majority are probably scratching their heads, too.

Season finale ‘The Passenger’ was as tense and comprehensive as the series finale of most shows. The biggest reveal, surely, is that Charlotte Hale (Tessa Thompson) has been dead for the latter timeline of the season, which chiefly follows Bernard (Jeffrey Wright) and the Delos team struggling to jog Bernard’s scrambled memory so they can find the Forge’s encryption key. During an earlier confrontation in the Forge, Bernard killed Dolores in fear that she might wipe out the human race. Later, seeing Hale’s inner darkness when she murders Elsie (Shannon Woodward), he changes his mind and decides that allowing the host species to grow is worth a shot. To right his wrongs, Bernard creates a host body for Dolores (Evan Rachel Wood) in the image of Hale. Dolores/Hale proceeds to kill the real Hale, and acts undercover in Hale’s place with the Delos team.

In the first timeline, which focuses more on Maeve’s (Thandie Newton) search for her daughter and the other hosts’ quest to find a new home, we learn that the Forge can unlock a gateway to an untouched, digital world for the hosts to inhabit. That arc concluded with Maeve sacrificing herself in order to ensure that her former daughter and her mother—along with Akecheta (Zahn McClarnon) and others—escape into this world.

While their new digital world, called the Sublime, seems paradisiacal to some of the hosts, Dolores sees it as another “gilded cage” for the humans to entrap the hosts in. After the Door closes and some of the hosts escape, she diverts the location of the Sublime somewhere only she can access it. Then, as discussed earlier, Bernard kills her, witnesses Elsie’s murder, recreates Dolores as Hale, and finally scrambles his memory to protect his and Dolores’ actions. Cue the second timeline, which ends with Dolores/Hale murdering Strand (Gustaf Skarsgård) and escaping into the real world. In a secluded house, she recreates herself in her old body and awakens Bernard. The three of them decide to team up and begin rebuilding the host population in the real world.

Then, there’s the Man in Black (Ed Harris) to take care of. The last we see of him during the main body of the episode, he is mangled but breathing with the Delos medics while Dolores/Hale hitches a ride into the sunset. For the patient viewers, however, a post-credits scene reveals his, and perhaps humanity’s, ultimate fate. In the distant future, his reincarnated daughter Emily (Katja Herbers) tests a similarly reincarnated (by way of the park data stored in the Forge) version of William, as she chooses to call him. The knee-jerk reaction was to think that the fan theories were true—that the Man in Black has been a host all along. But the more rational explanation is that the two of them are long dead, and copies of their consciousness are being brought to life, à la James Delos (Peter Mullan).

While the episode is a lot to process during a first viewing, Westworld’s dual ending actually answered many more questions than it raised. But the new questions posed are massive ones. How will the Dolores duo and Bernard kickstart the rebirth of their species in the real world with seemingly no outside help? Will the story return to the park, and for what reason? How far in the future—and in what season—will that post-credits scene play in? And, finally, how soon can we get our hands on Season 3?

You can find Seasons 1 and 2 of Westworld on HBO and both of its streaming platforms.