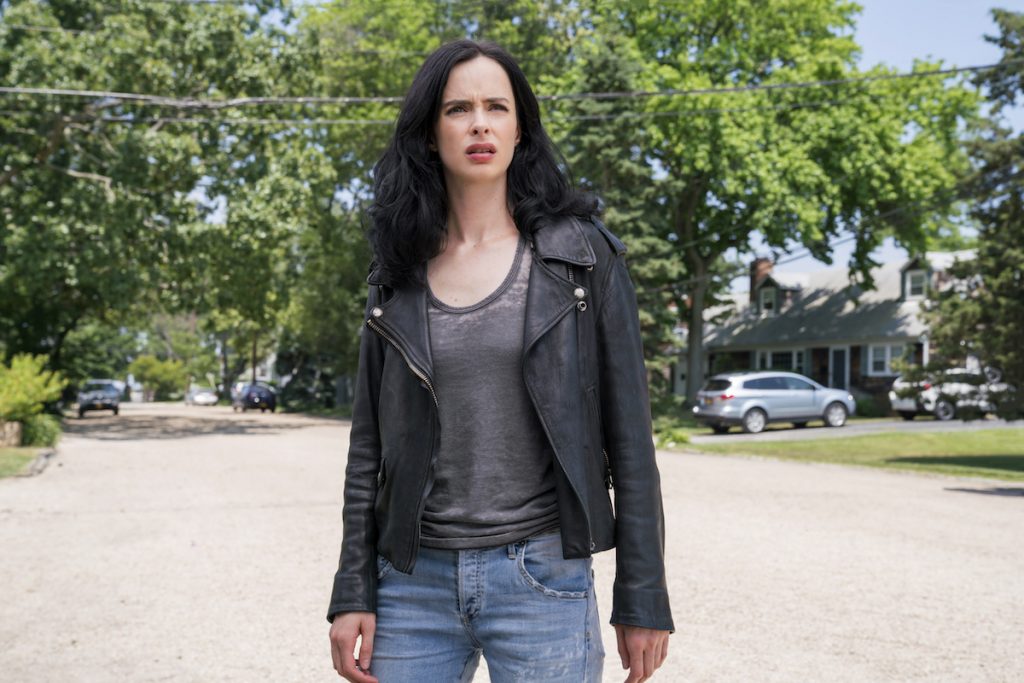 You’re favorite anti-heroine is back, and she arrives during a larger cultural moment in which her brand of righteous justice feels absolutely timely. Jessica Jones won fans over when it was released back on Netflix in 2015, which feels like roughly another lifetime ago. Embodied by the searing, ultimately soulful performance of Krysten Ritter, Jessica Jones was an immediate sensation, giving Marvel a much needed female superhero who was an unapologetic butt-kicker. Ritter was sensational as the hard drinking, self-loathing private eye, a super powerful, aggressively self-destructive figure who only marginally grew into a more self reflective character as the first season (which was fantastic) drew to its gruesome, thrilling close. Now back for season 2, Jessica arrives in the midst of the #MeToo movement, in a larger cultural and political landscape in which women, young girls, and heck, many men would probably love to have a real-life Jessica Jones around to offer a more strident, quick moving version of the course correction we are only now starting to see. One gets the impression Jessica might ask, “What took so long?”

We’ve missed her. While we got to see her bring her fearlessness (and wit) last summer in Marvel’s The Defenders, Jessica is best as the centerpiece of a show, not a cog in a larger superhero machine.

Jessica Jones season 2 was released on Netflix on March 8, and the new 13 action-packed and emotional follow Jessica as she delves deep into her memory to try and recall what really happened to her the day of the tragic accident that left her the only surviving member of her family. Jessica is joined in her search by her foster sister and most reliable confidant Trish (Rachel Taylor), who is facing quite a few struggles of her own this season (not that she had it easy in season one).

So far, season two has managed to live up to the considerable momentum created by that thrilling, chilling opening season.  Each episode reveals more and more of Jessica’s past as we run into not only new characters and new romances—the new building superintendent Oscar (J.R. Ramirez) has already stolen our hearts as he slowly worms his way into Jessica’s—but also a few familiar faces return, if only briefly.

Of course the show wouldn’t be the same without a little emotional turmoil—and lots of whiskey; As Jessica digs deeper into her past she has face memories she buried 17-years ago, which end up forcing her to consider the fact that maybe her bad attitude that she began season one with was the correct one; some memories are meant to stay buried.

The full 2nd season Jessica Jones is available for streaming on Netflix.