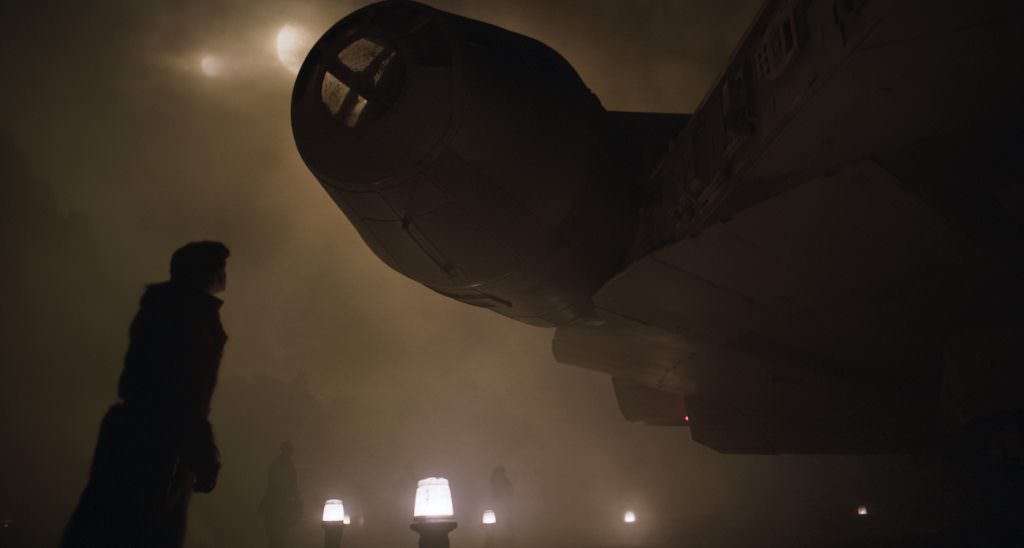 Light on plot and heavy on atmospherics, Disney finally revealed a look at Ron Howard’s new Solo: A Star Wars Story, first, in a teaser during last night’s thrilling Super Bowl (the Philadelphia Eagles delivered a Rebel Alliance-like victory over the mighty Empire, the New England Patriots), and then in a longer, proper trailer just a few minutes ago. Obviously we’re sharing both, and our bottom line after seeing this two looks is that Solo looks thrilling.

First, here’s the spot that dropped during last night’s game—light on plot details but heavy on gorgeous atmospherics. One of the most interesting choices in the trailer was how little we actually see of Solo himself. Played by Alden Ehrenreich, this glimpse at Solo plays with what we know Han Solo will become by giving us a few brief sequences of his life before he was a legendary smuggler and eventual hero of the Rebel Alliance. We see some hugely important firsts in this spot, including the first time Han crosses paths with his eventual partner in crime and trusty number two, Chewbacca, the first time he comes face-to-face with his eventual frenemy, Lando Calrissian (Donald Glover), and, of course, the first time Han takes a load (pun intended) of the Millennium Falcon.

Written by father-son screenwriting team (and Star Wars staples) Lawrence Kasdan and Jon Kasdan, and directed by Howard, the above spot should go some way to assuaging the fear that the bumpy production that saw original directors Phil Lord and Chris Miller depart has not irrevocably damaged what should be a thrilling new addition to the Star Wars galaxy. Solo joins Rogue One as now the second non-saga Star Wars film, in which we witness major events that happened on the periphery of the larger, 9-film Star Wars franchise. Rogue One gave us the inside story of the team that stole the plans for the Death Star in the events leading up to A New Hope. Solo takes place even before those events, chronicling the formative years of the young smuggler as he made the friends and enemies who would go on to shape his life, and learned a set of skills that would become crucial in defeating the Empire.

The larger trailer, just released, gives us a deeper look at that story. “I’ve been running scams on the streets since I was ten,” the trailer opens, giving us in five seconds more background on the young Solo than the entire Super Bowl teaser. We watch Han blaze through a city on a speeder as he discusses some key points in his history, like how he was kicked out of flight school “for having a mind of my own” and his determination to be a pilot. Enter Woody Harrelson’s Tobias Beckett, who appears to be the man who leads Han into a life of smuggling. Beckett’s putting together a crew, and would the young rebel (before he was a Rebel with a capitol R) care to join? You know the answer.

The full length trailer offers thrills aplenty, with a fantastic chase sequence aboard the Falcon, an introduction of Emilia Clarke’s Qi’Ra, a central figure in young Solo’s life, and a glimpse at Thandie Newton’s mysterious character. Plus, the film looks gorgeous, thanks to the work of Oscar-nominated Selma and Arrival cinematographer Bradford Young.