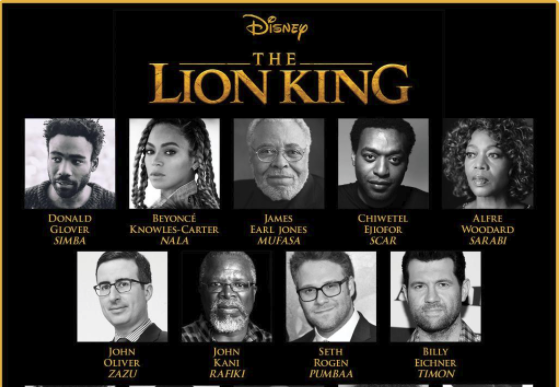 The Lion King live action remake has found its Queen, and the news is better than we ever dared to dream. Disney tweeted the full cast lineup, and the biggest announcement was that Beyoncé has officially accepted the role of Nala.

Queen Bey has truly given us a gift. We are already fantasizing about hearing her velvety golden vocals singing Shadowland. Is it too much to hope that a brand new Nala solo will be added to the score? Beyoncé already has some screen credits and she’s always selective about only accepting roles that she’s absolutely perfect for. Bey absolutely slayed the role of Deena Jones in Dreamgirls alongside the knockout cast of Jennifer Hudson, Anika Noni Rose, and Jamie Foxx.

As for Simba, we already knew that Donald Glover would fill the role. If anyone can hold his own opposite Beyoncé, Glover is our guy. The Atlanta star has rocketed to the top of every casting list appearing in this year’s Spider-Man: Homecoming and will soon appear as young Lando in Solo: A Star Wars Story.

Speaking of Star Wars legends, James Earl Jones will reprise the role of Mufasa. He’s the only actor to return from the 1994 animated version. Jones has a unique gravity that no one has been fool enough to recast. The original voice of Darth Vader has returned to the role in the recent reboot Rogue One.

The entire cast is so talented, that it’s blinding to look at them all in one place. Chiwetel Ejiofor, Alfre Woodard, John Oliver, Seth Rogen, Keegan-Michael Key and more. It looks like a fantasy league lineup of the hottest talent in Hollywood.

The most devastating part of this news is that it won’t be released until 2019. Until then, we’ll keep watching Jon Favreau’s amazing Jungle Book on repeat and dreaming of the Disney magic yet to come.