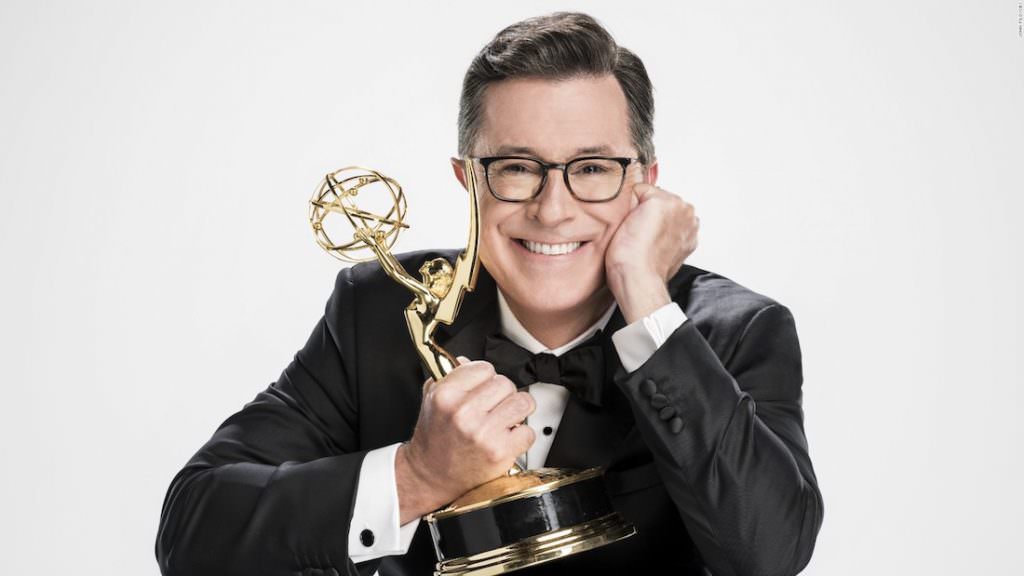 Our Favorite Stephen Colbert Moments at the Emmys

Hulu’s The Handmaid’s Tale, Netflix’s Black Mirror, FX’s Atlanta, HBO’s Big Little Lies and VEEP were some of the big winners last night (and Julia Louis-Dreyfus made history—again), on a night that showcased TV’s increasingly diverse storytellers. All in all, it was a great night for TV. And when we weren’t enjoying seeing the likes of Atlanta’s Donald Glover and Louis-Dreyfus make history, we were cracking up at some of the delightfully absurd moments that came courtesy of host Stephen Colbert. We’ve embedded our favorite Colbert sequences below for your viewing (or likely, re-viewing) pleasure.

Colbert opened the show with a musical number that celebrated TV’s ability to make us forget our troubles. This was an…interesting take, considering the current occupant of the White House is not only a former reality TV star, but someone who saturates our airwaves like no other president before him, but, it was easy to forgive the flimsy conceit and simply enjoy the verve and humor of the song and dance number. Plus, it was a star-studded opening bit, including Chance the Rapper and cast members from a bunch of shows, including This Is Us, Stranger Things, Veep, Black-ish, and The Americans. The routine was so pleasing, apparently, that it even delighted the grotesque demogorgon from Stranger Things:

Once the opening song and dance routine was done, it was time for Colbert’s monologue, which included a look at the current, happy (in terms of diversity and creativity, not necessarily subject matter) state of television, and, unsurprisingly, some barbs directed at Donald Trump. This led to arguably the night’s most controversial moment; former press secretary and Melissa McCarthy punching bag Sean Spicer appeared on stage, claiming tonight’s audience was the largest ever—a call back to his lie, on behalf of his former boss, about the size of Trump’s inauguration crowd. Of all the reactions from the audience, none beat Melissa McCarthy’s, who so memorably played Spicer on Saturday Night Live. She looked both surprised and annoyed:

Perhaps the funniest bit was when Colbert started glitching, which required a couple of Westworld scientists to drag him back stage so the evening’s host (in the Westworld sense of the word) could be inspected by Bernard (Jeffrey Wright) from the show. Here’s your opportunity to see a naked Stephen Colbert, save for a bowtie. They also manage to get in another jab at Trump, the funniest of the night:

Colbert also scored an interview with Emmy herself!

It was a relatively brisk night at the Emmys, with Colbert, unsurprisingly, doing a stellar job as your genial, deeply funny host. Colbert’s always had a lot of bite in his comedy, but he’s also one of those performers whose enthusiasm is genuine, and therefore infectious. It was another great night on TV, even if the medium isn’t quite the portal of escape the opening song claims it is. As shows like The Handmaid’s Tale and Black Mirror prove, TV is a place where seriously talented people have what seems to be an ever increasing amount of space to offer scorching commentary on the world at large. Or, in the case of Julia Louis-Drefyus and the brilliant VEEP, a place to cut even the most powerful people and positions down to size.