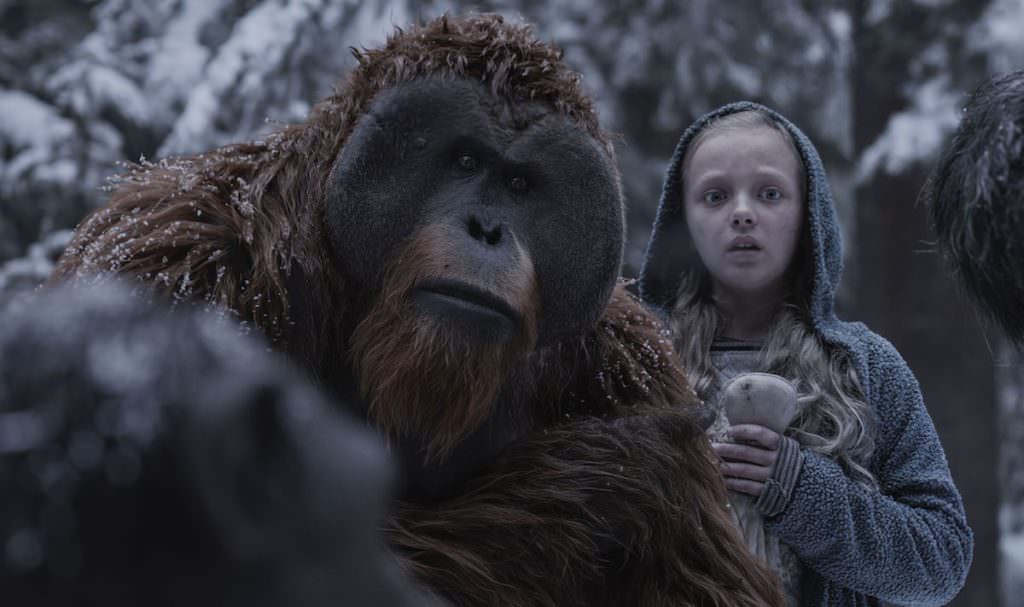 Early Buzz: War for the Planet of the Apes is a Summer Blockbuster for the Ages

Earlier today we published our interview with writer/director Edgar Wright about his incredible new film Baby Driver. It is one of the best movies you will see this summer, possibly this year. While Wonder Woman technically premiered before summer, we still consider it a summer film, and one that we, like everyone else, fell in love with. Now we present to you the third excellent film of the summer, Matt Reeves' War for the Planet of the Apes, the third installment in one of the best reboots of the century.

One of the aspects of the new Apes trilogy that we've been writing about is the astonishingly sophisticated motion-capture technology that has allowed star Andy Serkis, playing the trilogy's undisputed hero, the chimpanzee Caesar, and his fellow mo-cap performers Karin Konoval, Terry Notary and Michael Adamthwaite, pictured below, and Steven Zahn, seen in this clip, to make the apes the emotional core of the three films.

L-r, Karin Konoval, Terry Notary, Andy Serkis and Michael Adamthwaite on the set of Twentieth Century Fox’s "War for the Planet of the Apes."

Yet while the mo-cap technology can turn Serkis, Konoval and the rest of the crew into their respective apes, their performances cannot be digitized into reality. These actors need to act to give their apes the emotional depth and shading that translates into compelling characters. They are proving, as Serkis has done since he played Gollum in The Lord of the Rings, that these mo-cap performances deserve to be included in any acting award consideration—you cannot watch these films and be moved by Caesar and his fellow apes without being moved by the performances of these actors.

Along with the actors and the mo-cap technology, the new Apes trilogy has benefited from extremely sharp writing, very strong direction (beginning with Rupert Wyatt, in Dawn of the Planet of the Apes, and continuing with Matt Reeves work on Rise and War), and ace production work from all departments. The results have spoken for themselves (often via the growing vocabularly of Caesar and his cohort), and now continue in the final film in the new trilogy—a film critics are raving about.

So, without further ado, let's take a quick tour of what some of the critics are saying before the film's July 14 premiere:

i09's Germain Lussier writes that "War for the Planet of the Apes is one of the best—and bleakest—summer blockbusters ever," and that's just the headline. "When War for the Planet of the Apes ended, I was unable to move. Glued to my seat, I sat dumbfounded at the achievement I’d just witnessed: an exquisitely filmed, emotionally stunning film that challenges what a big-budget, summer blockbuster is supposed to be. And it’s about a planet of apes."

Variety's Peter Debruge writes "If you already find yourself on the side of the "Apes" enthusiasts … then "War" will likely be a mind-blowing experience, upping the ante via both its bleeding-edge visual effects and the grim self-seriousness of Reeves' approach.

The Village Voice's Bilge Ebiri writes that "The effects are incredible, the action is exciting, the music is great, and Andy Serkis, once again embodying a non-human character through motion-capture technology, remains terrific."

Uproxx's Mike Ryan says "It's actually heartening to know that "summer blockbuster"-type movies like this can still be made."

Mark your calendars—War for the Planet of the Apes comes out on July 14.