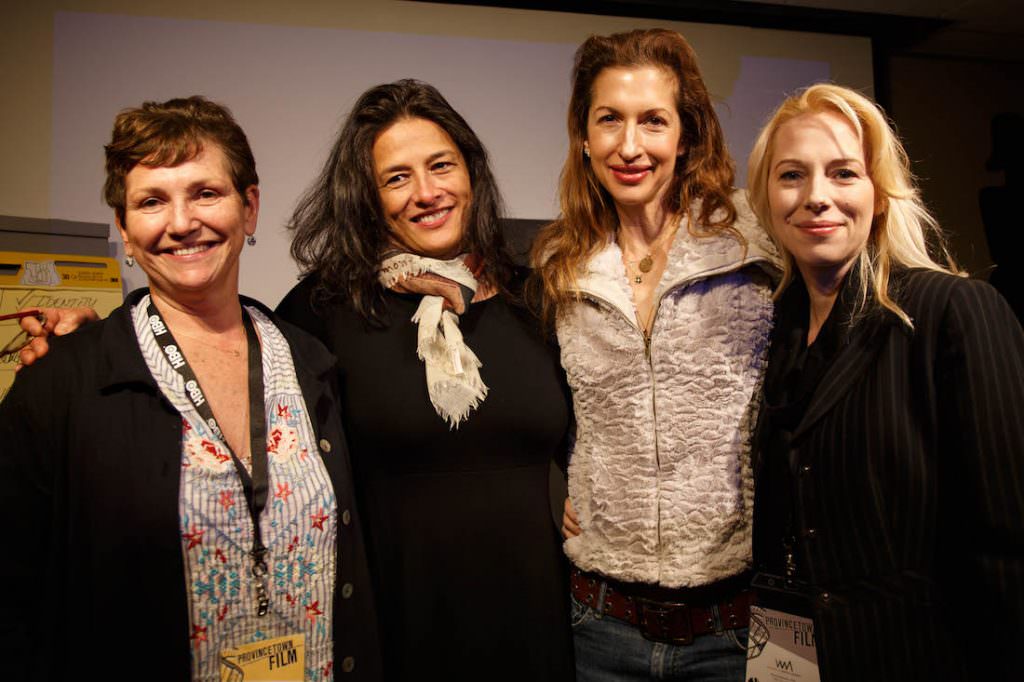 The Women’s Summit Captures a Moment for Action

The purpose of the recent Women’s Media Summit in Provincetown, which drew 114 participants from around the country and from many areas of film and media, wasn’t just to talk about the gender gap in popular entertainment. Instead, the emphasis was on concrete action.

So, after a day of presentations and panel discussions, the Summit organized attendees into working groups which hammered out specific suggestions aimed at increasing gender equity in film and TV. The Summit will produce a “white paper” on the recommendations in June, says event co-chair Christine Walker, a film producer and CEO of the Provincetown Film Society which sponsors the annual Provincetown International Film Festival.

The point of the Summit was to strategize and come up with “different approaches to the problem,” said Walker. The reason, simply put, she said, is because “an equal voice in our own cultural narrative is our right.”

The gender gap in modern Hollywood has been well-documented; a recent study showed that just 7 percent of directors of the top 250 domestic grossing films last year were women. That’s from the 19th annual “Celluloid Ceiling” report by the Center for the Study of Women in Television and Film at San Diego State University.

The picture isn’t much better in front of the camera.

While more women played major characters in films in 2016, the percentage of female characters with speaking roles has declined, the same study found.

Women accounted for 37 percent of major characters in the 100 top-grossing 2016 films, up 3 percentage points from 2015. But despite female-centered hits in 2016 such as “Hidden Figures,” “Ghostbusters” and “Bad Moms,” only 32 percent of the 2,595 female characters had speaking roles.

These statistics mean it’s more than careers that are at stake.

“This is not a fight about jobs. This is a fight about how our stories are told. This is a fight about the perspective from which our universal stories emerge,” notes Maria Giese, a film director who in 2015 instigated an industry-wide federal investigation into discrimination against women directors in Hollywood that’s still ongoing. Giese joined Walker and Caroline Heldman of the Geena Davis Institute for Gender in Media to organize Women’s Media Summit.

The Summit opened with a keynote speech from Victoria Hochberg, whose long list of television credits includes Sex and the City, Touched by an Angel and Ally McBeal. Back in the late 70s, Hochberg told the crowd, she and five other female directors noticed that they weren’t getting hired for episodic television work, the bread-and-butter jobs for directors. “We’d made it into the D.G.A. [Director’s Guild o America] but none of us was working,” she said. They charged gender bias but in 1983, a judge dismissed the suit.

Despite that setback, Hochberg said the actions of the six women directors “changed the landscape and companies began to hire more women. By 1995 it flatlined.” Less diversity behind the cameras meant less diversity on screens, she noted. Hochberg drew laughs as she cited titles of recent Oscar-nominated films — Boyhood, Birdman, American Sniper — all men-centered stories directed by men, proving that does matter who writes or directs a movie. “In ‘The Revenant,’ Leonardo DiCaprio gets mauled by a bear. Female, one hopes,” she said to laughter. “Last year, ‘Arrival,’ fortunately needed a woman who knew how to listen and communicate.”

Other speakers agreed with Hochberg that the issue isn’t just about who gets the jobs; it is about what gets made and what gets seen. There is tons of talent that’s not being used to its fullest,” said panelist and filmmaker Maria Agui Carter, who  pointed out the irony that “it’s women who control the wealth and buying decisions” in America. She added that it isn’t enough to have token diversity. “Diversity mandates don’t help unless such positions bring with it tools like money and the power to green-light projects. Without that, they’re just gatekeepers,” she said.

“Women and minority directors are nearly zero on must [television] shows, so leadership is an issue,” noted Kirsten Schaffer of Women in Media. Unlike a feature film, television show-runners must get directors approved in a complicated process. There are exceptions, she said, citing several powerful show-runners with enough clout to hire whomever they want to and who have made it a personal mission to hire women and minorities, such as Ava DuVernay’s Queen Sugar; Jill Soloway’s Topple Productions and Ryan Murphy’s productions.

Gillian Thomas of the ACLU Women’s Rights Project discussed Giese’s ongoing case. In 2015, the ACLU contacted the U.S. Equal Employment Opportunity Commission (EEOC) calling for a federal investigation into discrimination against women directors. That investigation is ongoing. Thomas said she is “optimistic” about this government effort even in a Trump administration (“Trump hates Hollywood,” she said) but told the audience that litigation is just one path to fixing the problem and that what’s needed is  “a mosaic of solutions.”

Finding those solutions was the task of the working groups, charged with coming up with specific strategies for action, that conferred during the second day of the Summit.

The Summit “exceeded all my expectations,” Walker says. “The idea was to gather people together, sequester them in a room and figure out priorities.” Working group participants identified seven key areas — litigation, marketing strategies, tex incentives and lobbying among them —to tackle over the next two months. Anyone interested in working on one of these initiatives is invited to sign up for a task force.

For more information go to http://womensmediasummit.org.