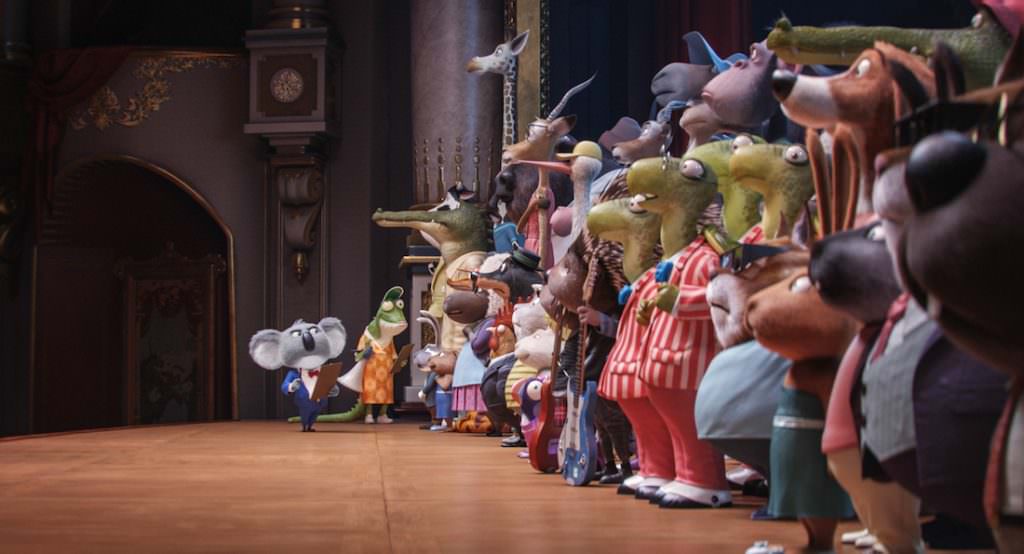 If you have ever watched American Idol or The Voice and wished that the contestants were animals instead of humans, then Sing is definitely playing your tune – or should that be ‘toon?  Writer/director Garth Jennings – the British filmmaker whose quirky vision graced the cult hit Son of Rambow as well as The Hitchhiker’s Guide to the Galaxy –takes his first stab at an animated feature, which opens Dec. 21.

Helping fulfill that goal is a top-notch voice cast including Matthew McConaughey, Reese Witherspoon, Jennifer Hudson, Scarlett Johansson and Seth McFarlane along with a soundtrack filled with more than 65 songs that range from Frank Sinatra ballads to Taylor Swift. Jennings speaks about what went into getting the rights to that music and how he cast actors for certain roles.

Getting the licensing rights for the soundtrack must have been a monumental job.  How did you and your team go about it?

I was in the easiest position of all. I would say, “Can we have Golden Slumbers by the Beatles and then have Jennifer Hudson sing it?” I was making choices and suggestions and else was getting the clearances. It was a huge task.  We began working on getting the songs early. At least 80 percent were picked before animation started. Only in one instance did we show an artist how we would use the song to help with the negotiations. That was with Elton John’s I’m Still Standing. They agreed to a meeting so we could show them the sequence when Johnny (a Cockney gorilla played by Taron Egerton of Kingsman: The Secret Service) is at the piano and his father is escaping from jail. They said, “Marvelous. We love it.”

It was smart to pick songs that came from different eras and would appeal to a broader audience. I was happy to hear Mike the mouse (McFarlane) play Take Five by Dave Brubeck on his saxophone.

It all came down to whether we all loved the song. “Golden Slumbers” seemed like the perfect song to make a character like Buster (the impresario koala voiced by McConaughey, who comes up with the idea for a talent contest to save his failing venue) to fall in love with theater. We went with what was good. And it was great to be able to include different genres so kids can be exposed to them. It’s like when I took my four boys to Guardians of the Galaxyand they liked The Pina Colada Song. When you put it in a wonderful context, they can understand why the song is good.

Speaking of your sons, I noticed they provided voices for four of the 25 piglets who are the children of Reese Witherspoon’s singing homemaker Rosita. How old are they and did they get paid?

They are 13, 11, 9 and 6 1/2. They were paid for their work. About a few 100 Euros. It’s gone into a little piggy bank for them. Rosita’s situation is based on how my wife was struggling to get back to work after quitting her job 10 years before. Rosita’s inventions to handle the housework and care for her kids were based on my Mum. She could have had her own DYI show. She built a lot of stuff and would really get excited by a power saw.

You have directed a lot of noteworthy videos with such artists as Beck, Vampire Weekend and Radiohead. Did your background with working with such musicians come in handy for Sing?

It was very useful in terms of editing the film, especially at the end with the five big numbers. They each work in their entirety as a little story within a bigger story. It helped to know how an artist moves and where to put the camera.

Are you a fan of shows like American Idol and The Voice? You followed their example and provided a personal back story for the main contestants.

That is the bit I like the most – the back stories.  But with Sing, I take it away from being a TV show spoof and focus on Matthew’s character as much as I do the competitors. He has as much at stake as they do. But at the end, we take the competition out of  it so they are singing for themselves.

How did you decide which five animal acts would make it into the final round?  Unlike Zootopia, the animals simply act like humans – no worries about predators and prey.

We didn’t want them to act like animals. We were most interested in them being human caricatures. It’s that way in any children’s book that has animals dressed in suits and hats. There is little emphasis on what actual animal traits are found in each species.  A koala is usually lethargic but we made him into bubbly optimist who is out of his depth in the world. Everything is bigger for him. Buster is a little Zero Mostel , a scrappy guy. He wasn‘t based on what the animal is like.

You provide the voice for Miss Crawly, Buster’s elderly lizard assistant. Did you come up with that gravelly voice just for the movie?

She was a character that came together quite quickly.  Before you do the actual vocals, there are usually temporary scratch vocals. I provided a lot of them as did other people in the office.  I so loved playing her and, thankfully, that came through. She is based on a character in the novel A Confederacy of Dunces, Miss Trixie, and a character that Julie Walters did on a British TV show with Victoria Wood, an absolutely useless cleaning lady who would always bring the tea at the wrong time.

You did a voice for another animated film, Wes Anderson’s stop-motion Fantastic Mr. Fox.

Wes does a voice in Sing. He is Daniel, the very tall giraffe who sings Ben by Michael Jackson. He is too tall to hear Buster, so Johnny is picked instead.

Somehow, the koala actually looks like Matthew. You must have seen Magic Mike when he is the strip-club emcee and thought he could be a good showman. You even get him to perform a bit of Call Me Maybe.

He was as enthusiastic as he sounds. A ball of energy and he was thrilled to do something that his children could watch that isn’t Dallas Buyers Club. He bounced around the studio.

How did you pick the rest?

We knew that Reese would be perfect and that she could sing from Walk the Line. And I knew Scarlett could sing, she did voice work for Her and had the range to be a punk-rock porcupine. Taron had a beautiful acting voice. He came in and did a proper audition while singing a capella. For Meena (a shy elephant), I wanted someone new. I heard Tori Kelly singing on a live show. She auditioned for the acting role, the opposite of Taron. She nailed Hallelujah in the movie with fewer than six takes.

You have probably seen Sing with an audience several times now. What draws the biggest reactions?

What makes me really happy is the concert at the end, when people are rooting for the characters. The spontaneous applause starts around the time Buster hits bottom and his friend, Eddie (a rich slacker sheep voiced by John C. Reilly), comes to help him with the car wash. That triggers the beginning for a turn around. That really resonates massively.