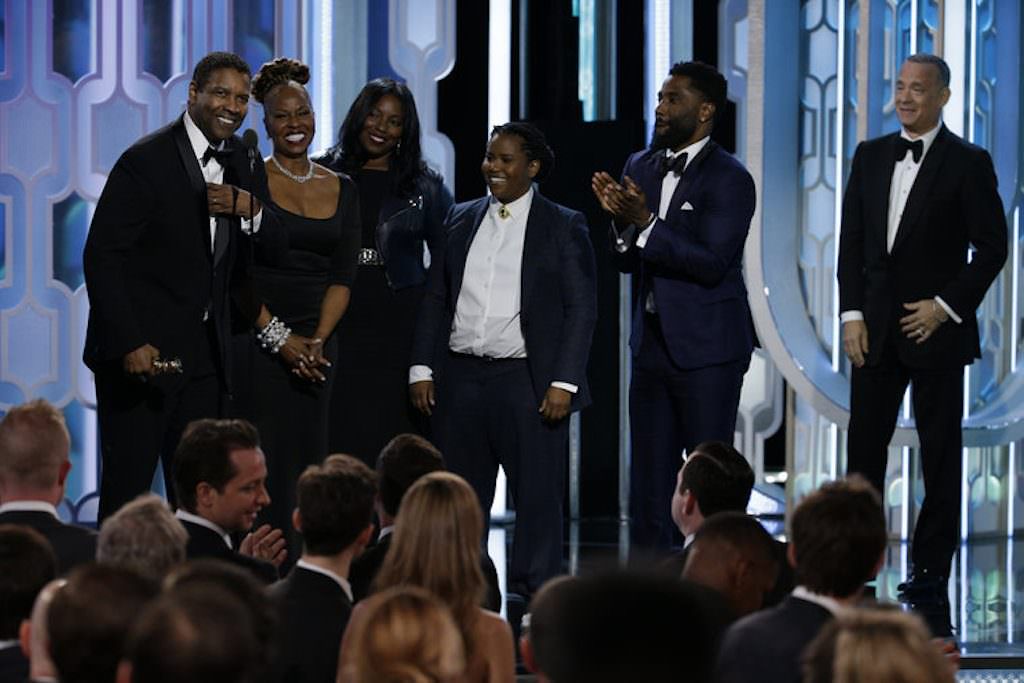 Tales of revenge and survival were your two big best picture winners, while an old favorite, 40-years his past his prime (in boxing terms, that is) won for best supporting actor. It was a night filled with some genuinely earnest (and wonderful) acceptance speeches, sprinkled amid the usual louche behavior of an irreverent host and some tippled guests. Let's take a look at the highlights.

The night began with host Ricky Gervais opening the show by thanking the Hollywood Foreign Press for the opportunity to host again, and telling the assembled celebrities just how much he enjoyed their work, and how much they all richly deserved a night to celebrate their good works.

But do you want to know what happened back here on Earth, like, say, what might have been Gervais' first words of the evening? "Shut up." His next six words? "You disgusting, deviant, pill-popping scum." Welcome to the 73rd Annual Golden Globes!

One of the standout moments belonged to Denzel Washington, whose acceptance speech for his much deserved (despite his relatively young age of 61) Cecil B. DeMille lifetime achievement Award award was a highlight of the night.

Sylvester Stallone's speech for his win for Best Supporting Actor in a Motion Picture seemed to include a major omission—where was a shout out to Creed writer/director Ryan Coogler or co-star Michael B. Jordan? It turns out, Sly did thank them, the telecast had cut to commercial before he gave a nod to the two men who helped Rock regain his footing for awards season.

Taraj P. Henson's acceptance speech for her win Best Actress in a TV Series for her role as Cookie on Empire included two great moments; 1) she passed out cookies as she walked to the stage, and 2) she gave an impromptu lesson in how to combat being played off the stage.

Henson wasn't the only one dealing with a pushy telecast director sending award recipients off (the first hour of the show went overlong, causing a time crunch for a lot of the acceptance speeches)—director Ridley Scott was feeling the heat when he accepted the award for Best Motion Picture, Comedy or Musical for The Martian. Scott also talked about Star Wars, and dealt with the business of movie making more than any other award recipient.

Lady Gaga's acceptance speech for Best Actress in a Limited Series was touching, genuine, and tear-streaked.

Leonard DiCaprio won for Best Actor in a Motion Picture for playing Hugh Glass in The Revenant (the night's big winner), and spoke about the making of the film, naming a ton of his collaborators, with great shout outs to below-the-liners like his makeup artist Sian Grigg. DiCaprio also shared his award with all the First Nations people represented in the film, and "all the indigenous communities around the world…it is time that we recognize your history, and protect your indigenous lands from corporate interests and people out to exploit them."

Let's wrap our video roundup with Jennifer Lawrence's acceptance speech for Best Actress in a Motion Picture, Comedy, who went to great lengths to thank her writer/director David O. Russell, saying, "You make movies like you don't even care if anyone ever sees them." After a beat, she added, with her usual pro comedic timing, "I mean that as a compliment, but I just heard it, and…"