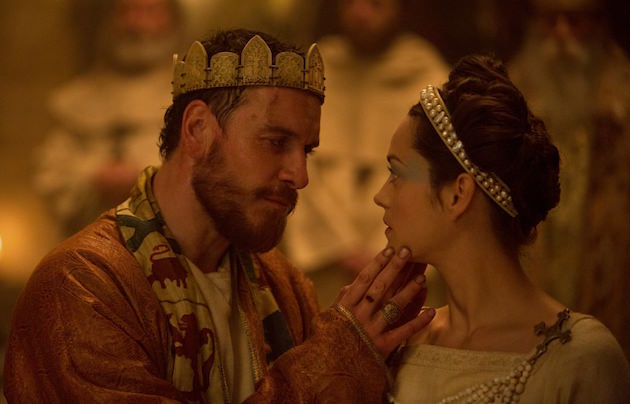 The story of Macbeth is certainly no stranger to adaptation. In fact, the Scottish play belongs to an impressive tradition of auteurist variation, including Orson Welles’ notoriously troubled 1948 production, Roman Polanski’s 1971 film and Kurosawa’s well-loved  in 1957.

Any Shakespearean adaptation carries with it piles of textual and philosophical baggage, requiring not only a new spin on a well-worn story but a justification for a new iteration. Justin Kurzel’s Macbeth certainly has both. I caught a screening at the Middleburg Film Festival for The Credits.

The Bard’s beloved tragedy spins the tale of brave Scottish general Macbeth who encounters a trio of witches sharing a prophecy that he will be king. Determined to bring the foretelling to fruition, he and his wife (Lady Macbeth) kill the men who stand in his way: including the current king and his best friend whose future children could pose a threat to his throne. But when more deaths take place — including the slaughter of an entire family and the subsequent passing of his wife, Macbeth’s spiral into madness accelerates towards his tragic, iconic end. This version, starring Michael Fassbender as Macbeth, Marion Cotillard as Lady Macbeth, David Thewlis as Duncan and Paddy Considine as Banquo. The film’s faithful screenplay was penned by Jacob Koskoff, Michael Lesslie and Todd Louiso.

For a story known for playing upon the pitfalls of ambition and the horrors of ego, Kurzel’s Macbeth is surprisingly generous. Trading greed for grief and the mental sick of guilt for creeping mental illness, this new Macbeth’s stakes are much higher, and more importantly, much more human than any previous adaptation.

The film opens, chillingly, on the greyed and lifeless body of a baby. Marking one of only a few storyline tweaks on the beloved play, Macbeth lingers upon the corpse before seeing Lord and Lady Macbeth standing nearby, distraught by the loss of their child. It’s a simple device, but the effect gives the otherwise villainous leads enough human motivation to make this new film feel more like a practice in dull dread than a study in narcissism.

But even though it might be fair to classify this Macbeth as more benevolent than previous incarnations, Kurzel isn’t interested in offering the audience any reprieves. The bone-crunching violence that follows the first scene is relentless, as Macbeth and his army meet foes on the battlefield. Wind-beaten yells that echo over the moors cut through the din of breaking teeth and nails as the men decked in war paint, chainmail and armor spill blood with dutifully dead eyes.

This scene leaves no doubt about Kurzel’s previous statements on the role of PTSD in the film. After the film’s premiere at Cannes, Kurzel spoke to The Guardian about the “scorpions” in Macbeth’s mind as representing the remnants from the toil of hand to hand combat. “This character [is] suffering from PTSD,” he said. “You have a soldier who’s engaged in battle month-after-month, day-after-day. Killing with his hands. Pushing a sword through muscle and bone. And if that doesn’t work picking up a rock and using that.”

Though a relative newcomer, this is not the first foray Justin Kurzel has made into the darkly violent. In 2011, he shook the Cannes Film Festival with one of the most harrowing films of festival, The Snowtown Murders, covering the “bodies-in-barrels” murders that took place in Australia in 1992 with repellant realism. But like Macbeth, Kurzel provided a sickeningly cogent justification for occurrences of despicable violence, this time by placing the narrative upon the shoulders of one of the accomplices of the case rather than the mastermind.. “I'm interested in how [violence] defines people; I'm interested in how people use it to fill something that's not in their lives,” Kurzel told IndieWIRE, and that interest seems even more scrutinized in his newest film.

Though the director himself doesn’t have first-hand experience with violent contact, Kurzel’s Scottish play is an oddly personal rumination on the desire to have children, falling into relief with the reality that the director himself is in the midst of raising two young daughters with Essie Davis, who starred in last year’s horror darling The Babadook.

By placing the impetus of pain for Lord and Lady Macbeth upon the loss of a child, Kurzel allows the couple’s actions to at least partially rest on their fear of emptiness rather than an egotistical motive. To further compound the issues of the loss of youth, much of the pain of Macbeth is projected onto young faces: a ghost of a young boy slain at the beginning of the picture appears to Macbeth far more than Banquo, and in a particularly harrowing scene of hand-to-hand combat, we cut from the carnage to a young boy’s face, wracked with horror. Even Lady Macbeth’s understated final scene evokes her as a childless Virgin Mary, pleading softly to an apparition of her decaying child as she lies shrouded in white beneath a cross. 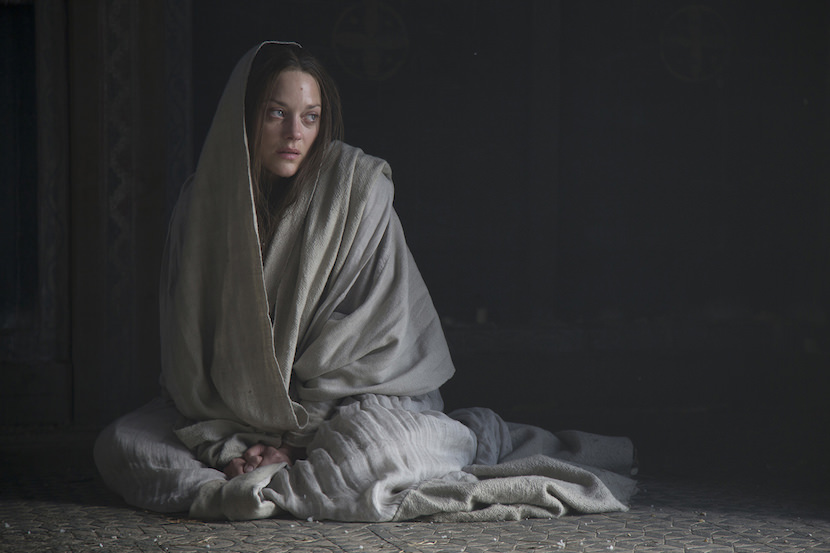 Bearing more than a few markings of the horror genre, Kurzel’s Macbeth is rich in its tactility: trading in the textures of blood, spit and vomit. And though the film indulges in enough creeping, crawling darkness to place the aforementioned scorpions in the mind of even a casual viewer, Macbeth’s humanist rationale for a couple’s heinous actions is uniquely charitable, if unsettlingly relatable.

Macbeth will hit theaters December 4. Justin Kurzel is set again to work with Fassbender and Cotillard on video game adaptation Assassin’s Creed, which is now filming.