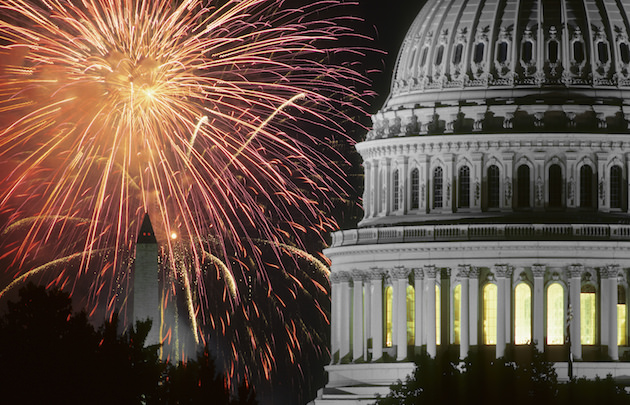 Celebrating the Fourth of July Through Film

Since its beginning, film has been a lens into the American identity and soul. It is a vehicle for depicting how we collectively define ourselves, and how others across the planet understand what gives us our unique character as a nation. Perhaps no holiday provides as strong a backdrop for the American experience, in film, as the fourth of July. Just about every genre of film has used Independence Day as a backdrop – dramas, political commentaries, underdog stories, comedies, history and action-packed summer blockbusters.

Remember these great movies where the Fourth of July had a leading role: That bittersweet scene at the beginning of Barry Levinson’s turn-of-the-century semi-biopic immigrant story, Avalon, of arriving in Baltimore to the wonder and hope of Fourth of July fireworks and lights. How about the story of American dissent as an act of patriotism in Oliver Stone’s Vietnam War epic, Born on the Fourth of July – the true story of disabled veteran Ron Kovic. Steven Spielberg’s Jaws can be viewed in a colonial light – a rag tag group fighting mighty a foe over the Fourth of July holiday weekend. Perhaps the greatest embodiment of the Fourth of July in film is the fight scene in Rocky, a metaphor for the beginning of our nation; an underdog who refuses to give up the fight, set in Philadelphia on our nation’s Bicentennial.

We put together a list of films we think exemplify the Fourth of July holiday spirit. If you want to find out where to watch these classics, look no further than WhereToWatch.com.

In no particular order:

Rocky Balboa (Sylvester Stallone), a Philadelphia boxer, is but one step removed from total bum-hood. A once-promising pugilist, Rocky is now taking nickel-and-dime bouts and running strongarm errands for local loan sharks to survive. Even his supportive trainer, Mickey (Burgess Meredith), has given up on him. All this changes thanks to Muhammad Ali-like super-boxer Apollo Creed (Carl Weathers). With the Bicentennial celebration coming up, Creed must find a "Cinderella" opponent for the big July 4th bout — some unknown whom Creed can "glorify" for a few minutes before knocking him cold. Rocky Balboa was not the only Cinderella involved here: writer/director Sylvester Stallone, himself a virtual unknown, managed to sell his Rocky script (one of 35 that he'd written over the years) on the proviso that he be given the starring role. Since the film was to be made on a shoestring budget and marketed on a low-level basis, the risk factor to United Artists was small. For Stallone, this was a make-or-break opportunity — just like Rocky's million-to-one shot with Apollo Creed. Costing under a million dollars, Rocky managed to register with audiences everywhere, earning back 60 times its cost. The film won several Academy Awards, including Best Picture.

The second of three films by co-writer/director Oliver Stone to explore the effects of the Vietnam War (Platoon and Heaven and Earth are the others), Born On The Fourth Of July tells the true story of Ron Kovic (Tom Cruise), a patriotic, All-American small town athlete who shocks his family by enlisting with the Marines to fight in the Vietnam War. Once he is overseas, however, Kovic's gung-ho enthusiasm turns to horror and confusion when he accidentally kills one of his own men in a firefight. His downfall is furthered by a bullet wound that leaves him paralyzed from the chest down. He returns home, spends an appalling, nightmarish stint in a veterans' hospital, and follows an increasingly disillusioned and fragmented path that ultimately leaves him drunk and dissolute in Mexico. However, Kovic somehow turns himself around and pulls his life together, becoming an outspoken anti-war activist in the process. The film is long but emotionally powerful; many consider it Stone's best work and Cruise's best performance. Both were nominated for Oscars, as was the film itself, but only Stone, who co-wrote the film with Kovic from the latter's book, won for Best Director.

A group of intrepid humans attempts to save the Earth from vicious extraterrestrials in this extremely popular science-fiction adventure. Borrowing liberally from War of the Worlds, Aliens, and every sci-fi invasion film in between, director Roland Emmerich and producer and co-writer Dean Devlin present a visually slick, fast-paced adventure filled with expensive special effects and large-scale action sequences. The story begins with the approach of a series of massive spaceships, which many on Earth greet with open arms, looking forward to the first contact with alien life. Unfortunately, these extraterrestrials have not come in peace, and they unleash powerful weapons that destroy most of the world's major cities. Thrown into chaos, the survivors struggle to band together and put up a last-ditch resistance in order to save the human race. As this is a Hollywood film, this effort is led by a group of scrappy Americans, including a computer genius who had foreseen the alien's evil intent (Jeff Goldblum), a hot-shot jet pilot (Will Smith), and the President of the United States (Bill Pullman). While some critics objected to the film's lack of originality and lapses in logic, the combination of grand visual spectacle and crowd-pleasing storytelling proved irresistible to audiences, resulting in an international smash hit.

Based on Peter Benchley's best-selling novel, Steven Spielberg's 1975 shark saga set the standard for the New Hollywood popcorn blockbuster while frightening millions of moviegoers out of the water. One early summer night on fictional Atlantic resort Amity Island, Chrissie decides to take a moonlight skinny dip while her friends party on the beach. Yanked suddenly below the ocean surface, she never returns. When pieces of her wash ashore, Police Chief Brody (Roy Scheider) suspects the worst, but Mayor Vaughn (Murray Hamilton), mindful of the lucrative tourist trade and the approaching July 4th holiday, refuses to put the island on a business-killing shark alert. After the shark dines on a few more victims, the Mayor orders the local fishermen to catch the culprit. Satisfied with the shark they find, the greedy Mayor reopens the beaches, despite the warning from visiting ichthyologist Hooper (Richard Dreyfuss) that the attacks were probably caused by a far more formidable Great White. One more fatality later, Brody and Hooper join forces with flinty old salt Quint (Robert Shaw), the only local fisherman willing to take on a Great White–especially since the price is right. The three ride off on Quint's boat "The Orca," soon coming face to teeth with the enemy.

The third of director Barry Levinson's autobiographical "Baltimore Trilogy" (the first two entries were Diner and Tin Men), Avalon covers nearly forty years in the lives of an immigrant Jewish family. Sam Krichinsky (Armin Mueller-Stahl) emigrates to Baltimore in 1914, where Sam's brothers Gabriel (Lou Jacobi), Hymie (Leo L. Fuchs), and Nathan (Israel Rubinek) are awaiting his arrival. By and by, Sam meets his future wife, Eva (Joan Plowright). With the introduction of the Krichinsky's grown son Jules (Aidan Quinn), the film ventures into culture-clash country. Unwilling to become a manual laborer like his dad, Jules opts for the life of a door-to-door salesman. Eventually, he teams with his cousin Izzy (Kevin Pollak) to open the first TV store in Baltimore. Thereafter, the disintegration of the Krichinsky family is paralleled by the rise of TV's omnipresence in the American home. Avalon's elegiac and melancholy effect is underlined by Randy Newman's soulful musical score.

Yankee Doodle Dandy is no more the true-life story of George M. Cohan than The Jolson Story was the unvarnished truth about Al Jolson — but who the heck cares? Dandy has song, dance, pathos, pageantry, uproarious comedy, and, best of all, James Cagney at his Oscar-winning best. After several failed attempts to bring the life of legendary, flag-waving song-and-dance man Cohan to the screen, Warners scenarist Robert Buckner opted for the anecdotal approach, unifying the film's largely unrelated episodes with a flashback framework. Summoned to the White House by President Roosevelt, the aging Cohan is encouraged to relate the events leading up to this momentous occasion. In addition to Cagney, music directors Ray Heindorf and Heinz Roemheld also won Oscars for their efforts.

The first independent production of former studio mogul Jack Warner, 1776 was adapted from the hit 1969 Broadway musical by Peter Stone and Sherman Edwards. William Daniels, Ken Howard, and Howard Da Silva are among the many actors who recreate their Broadway roles. The story is set during the first Continental Congress, when the Declaration of Independence was drafted by such founding fathers as John Adams (Daniels) and Benjamin Franklin (Da Silva). The script attempts to "humanize" these remote historical figures by contemporizing them — particularly the character of Ben Franklin. Blythe Danner's character of Martha Jefferson is expanded for the film version to allow for an elaborate outdoor production number. After 1776, Warner made only one more film, the 1972 "grunge Western" Dirty Little Billy. On an added note: the picture was originally rated G with its theatrical running time of 141 minutes. It was later expanded to 166 minutes; the added scenes caused the MPAA to re-rate it PG (for language) in 1992. Both versions are available on video.