Love & Struggle in the City in Love is Strange

Writer/director Ira Sachs and painter Boris Torres were married in New York City in 2011. They joined the many couples who exchanged vows after the state legislature legalized same sex marriage in 2011. Their twin children were born a week after their marriage. It was around this time that Sachs was thinking about his fifth feature film. “I wanted to make a film about love from the very particular perspective of my own age and experience—as someone who’s not either very old or very young, but who could for the first time imagine a long love that becomes more beautiful with time,” he said in the press notes. “I was interested in exploring the different perspectives each of us has at different periods of our lives: as an adolescent, in middle age and in later chapters. I wanted to imagine what my own relationship, my young marriage, might look like in the years down the road.”

Love is Strange is the result of Sachs' thought experiment about his own marriage, and his relationship with his family, his friends, and the city he has lived in for 25-years. The story focuses on Ben (John Lithgow) and George (Alfred Molina), who finally get married, after four decades together, in a lovely ceremony in lower Manhattan. New York City, however, can give with one hand while taking away with the other. The joy of their marriage quickly gives way to George losing his job teaching music at a Catholic school, where the archdiocese decrees that George has violated the moral code (i.e., he’s married a man). As the primary breadwinner in the relationship (Ben is a painter), the couple can no longer afford their apartment. The city’s remorseless real estate market forces the newlyweds to temporarily live apart until they can find a new, affordable home. George moves in with two gay cops who live downstairs (Cheyenne Jackson and Manny Perez), while Ben heads out to Brooklyn to live with his nephew (Darren Burrows) and his wife (Marisa Tomei), where he has to share a bunk bed with their volatile teenage son Joey (Charlie Tahan).

Sachs, whose made a career of creating intelligent, superbly written films, keeps good company when crafting his stories. He wrote Love is Strange with his co-writer from his excellent 2012 film Keep the Lights On, Mauricio Zacharias. They had begun discussing ideas after Keep the Lights On premiered at Sundance. Through their discussions a few themes emerged, including the seasons of life and how information is passed from one generation to the next. Ben and George's lives are suddenly, inexorably intertwined with family and friends in ways that are surprising, humbling, and at times, terrifying. 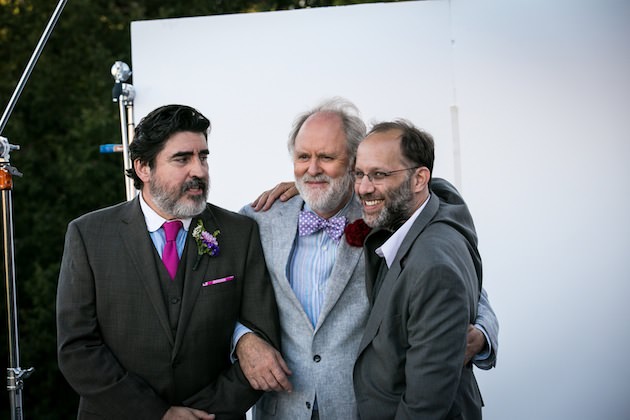 Sachs has said that he and Zacharias were influenced by both Japanese postwar cinema and contemporary French realism cinema. “Simple stories about families facing life’s challenges that still manage to reveal things very deeply about who we are.” One of the unique narrative elements of Love is Strange is that the drama isn’t derived from lovers getting to know one another or themselves, but rather facing the challenges of having to rely on other people, which also means opening themselves up in ways they haven't had to in years.

In a different sent of hands, Ben and George’s experience in Love is Strange could hold a very harsh mirror up to some of the issues plaguing the country in our current moment. As well as touching upon marriage equality, the film includes religious conservatism, discrimination, and income inequality. There’s even a look at the real effects of a social safety net, and the role it plays in actual lives. Yet these issues are background to the film’s real concern—the relationship between its two leads and to their family and friends. “The catalysts of the film are politically charged,” Sachs says, “but the results are human. The film is very much about how people connect to each other, and how they take care of each other.”

Another crucial relationship Sachs explores is the relationship anyone crazy enough to live in New York City has with the city and its relentless demands. "Sachs takes an impeccably balanced approach to the film," writes Entertainment Weekly's Joe McGovern. "It's neither an advertisement for same-sex marriage nor a scold against the Catholic Church…his ironic title refers to all tough relationships, including the one that the characters have with New York City." So many films and shows set in New York City take the actual heartache of living here and push it aside—why show how difficult it is to find an affordable place to live in the city when you can just have them live in a spacious TriBeCa loft (with professions that would often never allow that to happen outside of a multi-million dollar trust fund) and get on with the story? Yet the frenzied, constantly changing city and it's astronomical prices are a huge part of anyone's story who lives here, and Sachs and Zacharias understand that and use it to their advantage. George and Ben must face the grim reality of how nobody in New York (at least in the real New York) can afford the space to house two grown men. When they move in with their neighbors and nephew, respectively, they're making burdens of themselves after nearly four decades of self sufficiency. Any one who's been in a similar predicament (and most of us have) know how hard, how dramatic this is. What a great conceit for a film, too. 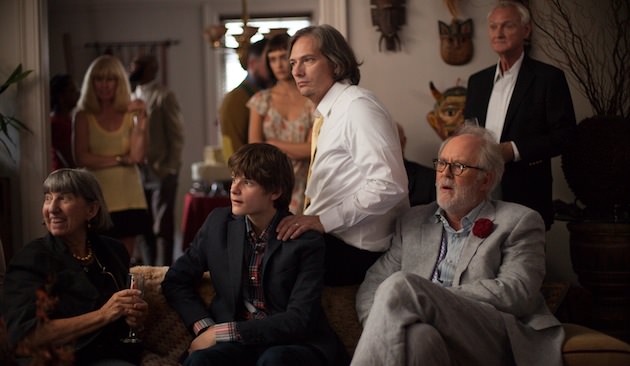 "Those of us that have families become accustomed to certain structures and routines, and you can't just bring another element into that family unit without ramifications," said John Lithgow. "Ben is a very beloved uncle but you plop him down in an apartment that does not have enough room for him, without really knowing when he's going to go away, eventually it's going to drive everyone crazy."

The rich New York tapestry that Sachs and Zacharias wove was inspired by films like Woody Allen's Hannah and Her Sisters as well as Sachs' own life. Ben and George are inspired by men and women "a generation older than me, who seemed to have a level of education and sophistication and depth and history that I wish I had." He also drew from his great uncle and his partner, Ted Rust, who were a couple for 45 years in Memphis, Tennessee. 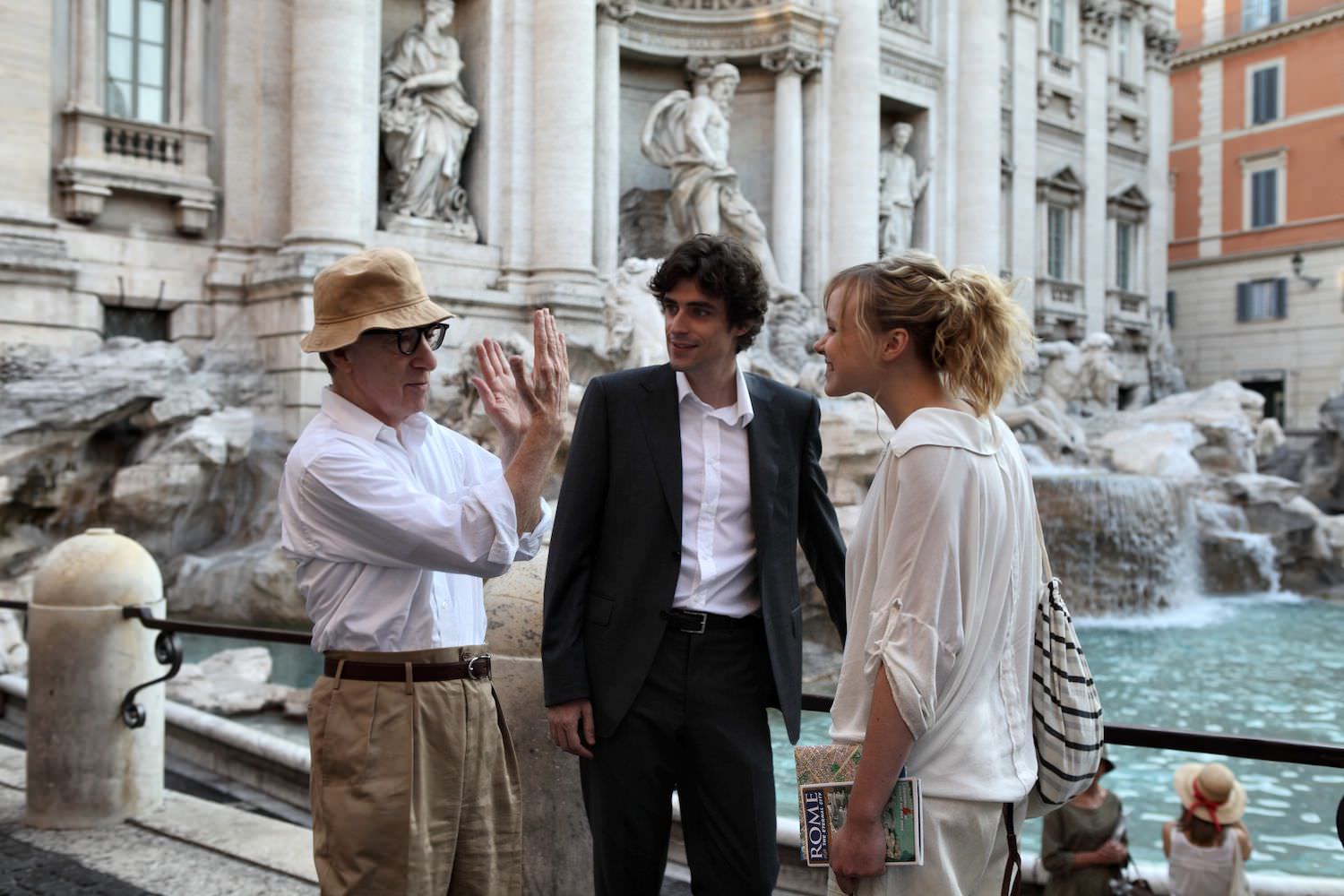 Sachs says that Lithgow's Ben owes a great deal to Ted Rust, who was a renown sculptor who, at the tender age of 97, shifted his art from classical references to his first contemporary image inspired by a photo of a teenager wearing a backpack. In Love is Strange, Ben decides to paint a teenager holding a skateboard, a piece of art that has a big impact in the story.

Apart from the wedding that starts the film, Sachs and Zacharias script eschews milestones in favor of the everyday rhythms of life. Time leaps forward, life moves forward, Ben and George try to make sense of their new situation while in motion. "I want the audience to be able to discover the characters, and in the process grow close to them," Sachs said. "And since this film is specifically about the seasons of our lives, I wanted to focus not on the typical melodramatic high points of life and death, but on the consistent flow."

Love is Strange began filming in New York City in late August of last year, and shot for 28 days. Along with collaborators like Greek cinematographer Christos Voudouris, production designer Amy Williams and costume designer Arjun Bhasin, Sachs was able to create a film about how strange all love really is—our commitment to each other, to our families and friends, and to a place like New York, it's all enough to drive you crazy, but would you really want it any other way? 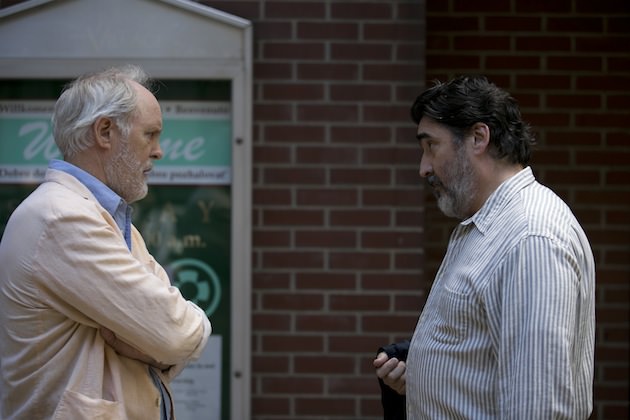