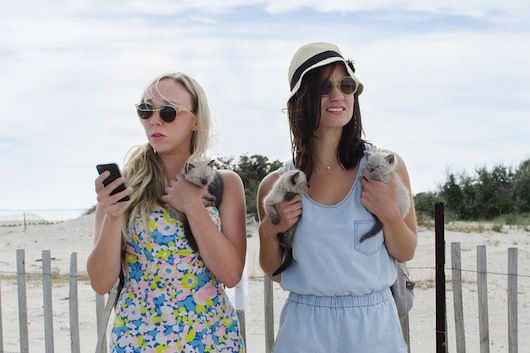 How do you write and shoot feature in a few months, cut it, have it accepted by a major film festival and then have it win that festival's major award? Writer/directors Sarah-Violet Bliss and Charles Rogers would be the perfect speakers on a panel here at SXSW on this very subject, considering as recently as last May, their Grand Jury Prize Winning feature Fort Tilden wasn’t even a thought in their mind.

“A lot of favors,” Bliss says when asked how the hell she and Rogers managed to pull this off in just a few months. Sitting on a couch in the busy bar at the Driskill Hotel in Austin, she spoke of accessing the film community she and Rogers fostered at NYU graduate film school. They managed to get a great deal on a RED Epic camera, a major win, thanks to a friend of their cinematographers. 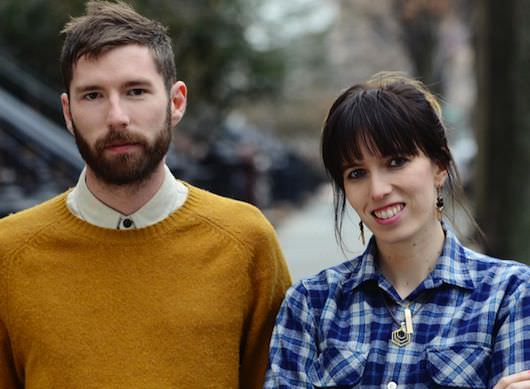 This explains the beautiful look of this speedily constructed film. Far from the style you might expect from an indie film made in a matter of months (a shaky handheld camera, an overall low production value), Fort Tilden could be accurately described as lush. This is a road trip movie that never leaves Brooklyn—friends and roommates Harper (Bridey Elliott) and Allie (Clare McNulty), the latter of whom is going to Liberia for the Peace Corps, are simply trying to meet two young men at the Fort Tilden beach, but everything, including and especially their own personalities, seem to stand in the way of them ever getting sand between their toes.

“We borrowed some lenses from a friend of ours, and it was mostly all exteriors so we didn’t have too much other lighting equipment,” Bliss explained. “We had a week of lighting stuff, other than bounce boards, so that made that cost doable.” Writing a script that took place primarily outdoors was part of Bliss and Rogers’ plan to keep the film affordable. “We also felt that, although it was a really cheap production, we wanted it to look good,” he says. “There are some movies that need to have a run and gun look, but because this had a certain genre and commercial appeal, we really wanted it to have a very classic look to it.”

Their mostly exterior approach also allowed them to utilize the visual splendors of New York that are free—the people. Shooting throughout Brooklyn, as Harper and Allie journey deeper into the borough on their way to the beach, Fort Tilden includes many splendid shots of the city that can’t be planned for (and probably wouldn’t work as well if they were) but also cost nothing. We meet New Yorkers, in all their variety, moving around our characters as they encounter one obstacle after another. “We got really lucky, because we were able to film exactly where the girls are in their actual journey…we were able to capture what life was like at that very moment,” Rogers says. “There are definitely a lot of people who enter the frame who are not related to the production in any way, but it really works out because you’re able to see who would actually be there, and it creates a really interesting context for these characters.”

Bliss and Rogers came up with the idea for Fort Tilden at the end of last May. They wrote the script in six weeks, shot for the three weeks, and then edited the film right up to the submission deadline for SXSW. “This time last year we had no idea we’d be making a feature film,” Rogers says. “We were like, ‘Let’s do something this summer,’” Bliss says, “we thought about a web series, and this film was one of the episodes, but then we realized we could make this a feature, so we decided to just do that.”

They then underwent a kind of production inertia—once they began the process of making their debut feature film, nothing, not even fear or anxiety, could stop them. “It’s funny, because I remember at certain points during pre-production and production, I thought, ‘I can’t believe this is happening,’ but I didn’t have time to sit with that thought," Rogers says. "There was never time to indulge in fear.”

Clare McNulty is a longtime friend of Bliss’s. She’s the more passive, sweeter of the two leads, the one committed to going to Liberia for the Peace Corps despite how much Allie makes fun of her for it, or, questions her motives in the first place. McNulty has been in a number of Bliss’s short films, and was a natural fit for the role. “I knew she had a really wonderful quality,” she says. Bridey Elliott, the caustic, biting Harper, is a member of the Upright Citizen’s Brigade, as well as a standup comedian. “We found our way to her,” Rogers says. The directors watched a short video of her online and were drawn to her weird, unique sense of humor.

The collaboration between Bliss and Rogers worked so well that they were able to share writing and directing responsibilities without having to compromise their vision, and dividing labor on set was similar to the writing process. “When we wrote this script, we were constantly communicating, talking about the characters and exactly what we wanted,” Rogers says, “We carried that right onto the set.”

Their inspiration for Fort Tilden came from Woody Allen’s comedies and films like Romy and Michele’s High School Reunion. “The comedy comes from the mistakes that they make,” Rogers says. Allie and Harper make plenty of mistakes, some of them hilarious, some of them dangerous, all of them fitting their characters.

Another clever element to Fort Tilden was how they visualized text messaging. They both realized there was no way to avoid it—these two mid-twenties women would be texting constantly. “It’s a form of whispering,” Rogers says. The film opens with the two of them at a rooftop party, listening to a painfully awkward song by two twins on acoustic guitars—we see Allie and Harper’s text messages pop up on screen, savaging the twins.

As for the relationship at the center of the film, Bliss and Rogers learned about their two characters as they got deeper into the writing process. “As you’re writing, these themes come up and you realize why you’re writing it is as you’re writing it,” Bliss says. “We didn’t have the actual ending until two days before our first reading.”

Rogers says that when they started scripting Fort Tilden, the film was about how Allie and Harper’s relationship changes throughout their journey to the beach, but by the time they were in the heat of scripting, they realized the story is more about how their relationship to themselves changed. “That was something that just came from writing and rewriting the script,” Rogers says.

They both feel that landing their film here at SXSW just felt right.

“We always had South By in mind. We missed the Sundance deadline, and we weren’t going to wait until next year…we always wanted to premiere at South By,” Bliss says.

Bliss edited the film right up until the last minute of the submission deadline for SXSW. “Janet Pierson [the head of SXSW Film] has been so great to us, and the audience is so generous,” Bliss says.

The jury confirmed their assumption that SXSW was the right fit for their film.