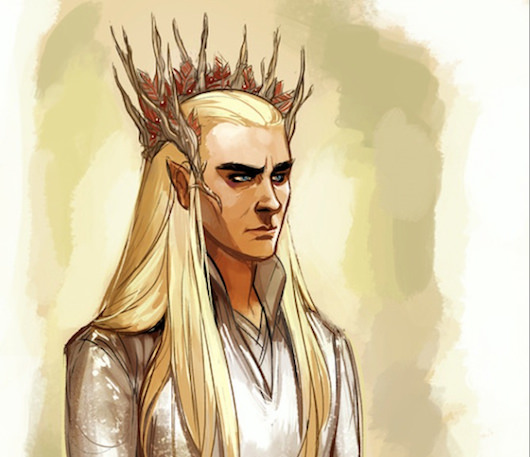 J.R.R. Tolkien has long been known for having an eclectic group of die-hard fans. From modern-day celebrities like Stephen Colbert (unequivocally one of the most hardcore Tolkien fans of our time, who elicited this from Peter Jackson: "I've never met a bigger Tolkien geek in my life." ) to the 1960s counter culture attachment to The Lord of the Rings and 1970s rock bands who wrote epic songs about the books, Tolkien always attracted a diverse crowd. His fans today are actively carving out their own place in fandom-history, with derivative work that spins off in unexpected directions. But with the impending release of The Hobbit: The Desolation of Smaug, Tolkien fans are unified through the excitement, which has produced some unexpected results. Nowhere is this fusion more visible than on Tumblr, the place to be for modern-day fandoms. 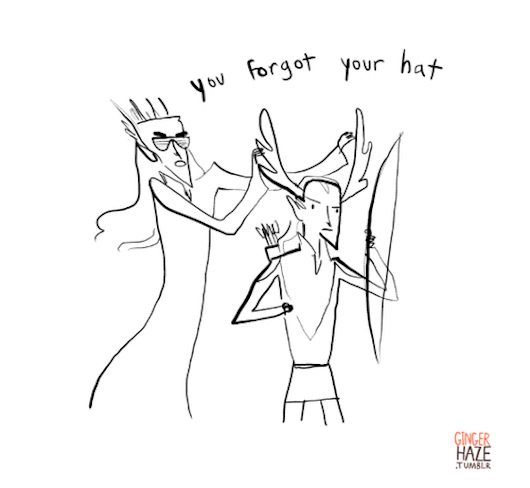 Trends on the Internet move quickly. One generation ago, (say, when the Lord of the Rings movies dropped ten years ago) fan activity was based on message boards and platforms like fanfiction.net or DeviantArt that support one genre or another of fan work. Today, Tumblr is the kingpin of Internet fandom, where reblogs of popular posts soar into five or six figures. Thanks to its multimedia format, serious academic discussions share a page with the sort of viral quirkiness that has made the site so explosively popular.

The Lord of the Rings was a source of memes long before the Internet. The countercultural movement in the 1960s and 70s readily adopted the slogan “Frodo Lives,” which was plastered on everything from bumper stickers to pins to brick walls. The appeal to hippies of hobbits, small pastoralists standing up against imperialism, is not so unlikely, though like contemporary Internet memes, the phrase escaped its original context and caught on with those who had no particular interest or knowledge of Lord of the Rings. And while Tolkien himself is said to have denied that the “pipe-weed” so popular amongst denizens of Middle Earth was marijuana, rather than plain tobacco, that did little to deter hippies from seeing the significance. 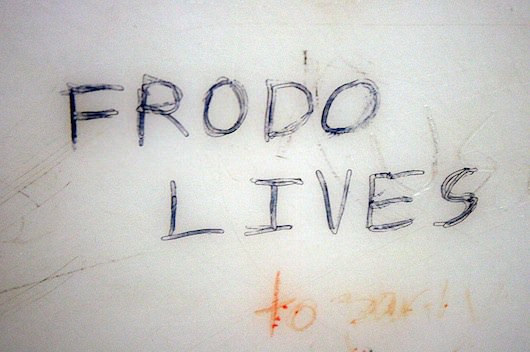 Flash-forward to today, and the “next-generation” of Tolkien fans are young enough that, for some, the movies were their first exposure to Tolkien. For Sandra Alexandersson, a Swedish 20-year-old who runs a popular blog under the name Thranduilings, The Hobbit was a beloved part of her childhood but she “fell completely in love” after watching The Fellowship of the Ring on VHS. But even her love for the series wasn’t a deterrent to her creation of the now-notorious and irreverent meme Diva Legolas.

In contrast, there are fans like Clara, a 17-year-old who may be found on Tumblr as an-animal-imagined-by-Poe. She also was hooked on The Hobbit as a child, but caring less for Lord of the Rings, dove straight into The Silmarillion, Tolkien's posthumously published mythopoeic collection. She has been active in the online fan community for several months, mostly engaged in analysis (or “meta,” in fan jargon) of the books.

There is naturally a huge overlap between fans of Lord of the Rings and The Hobbit; less so between those groups and devotees of the Silmarillion, but that may soon change. The new Hobbit movies dig into this dense material, fleshed out by stories that bind it to the broader Lord of the Rings mythology, and so by the time the third installment is released we may see a dramatic rise in interest in the more obscure corners of Tolkien's mythos.

Old-school fans, though more book-oriented and less active on Tumblr, are generally friendly to newcomers. As for the movies, Clara reports that many view them as “visual fan-fiction.” That may contribute to the inclusive attitude in this fan community. Although debates still rage over Elvish phonology or the gender roles of Dwarves, the fandom overall is described as polite and friendly by Internet standards: the movies aren't in conflict with the books but coexist with amateur fan work, just as people brought in by the films are accepted alongside book people (though with new movie approaching, you'd have to dig deep into the tags to find book-only Hobbit posts.)

As for the difference between Lord of the Rings and Hobbit fans, “I like to see us all as one big Tolkien fandom,” says Alexandersson. She finds Lord of the Rings fans to be generally more serious, corresponding with the more serious text, but the Hobbit movies bridge that gap. While the Lord of the Rings movies tried to preserve the tone of the series, the Hobbit movies are heavier than the book, more action-packed and aspiring to Lord of the Rings-scaled epic. Since The Hobbit was not originally written to be part of Middle-earth, in a way the changes smooth out discrepancies that Tolkien left in the book. While some disapprove of the alterations, many fans enjoy the expansion and attention to mythology. “I want to see more of Middle-earth,” said Alexandersson, “and that's what we get. I like depth and complexity, so I'm all for a more serious movie.”

One of the benefits of Tumblr is the ease with which serious-minded fans, as well as those interested in goofy photoshop images, can connect with each other. Clara found that involvement in online discussion gave her a “more in-depth, complete picture, critiquing Tolkien's views on race, politics, and gender.” Though open-minded for his time, some of the old Oxford don's views are hard to justify in today's world; just look at the lengths gone to by the movie creators to include female characters. Alexandersson also felt that the online community had deepened her relationship to the story, though she expressed concern that fast-moving fandom trends distort its more complex aspects.

Now, as in the days of “Frodo Lives,” fan reactions are hard to predict. On Tumblr, the most dramatic breakout character in the Hobbit films is Thranduil, played by Lee Pace. However, those who remember the antagonistic elf-king from the book may be surprised to find him here sporting shutter shades and a solo cup. The “Party King Thranduil” meme apparently originated in a 2012 promotional still, where the character was described as “knowing how to throw a party.” This drawing by the popular fan artist Gingerhaze brought it to attention, and since then it's spread into fan art, photo edits, and the universal currency of Tumblr: comic sans memes. 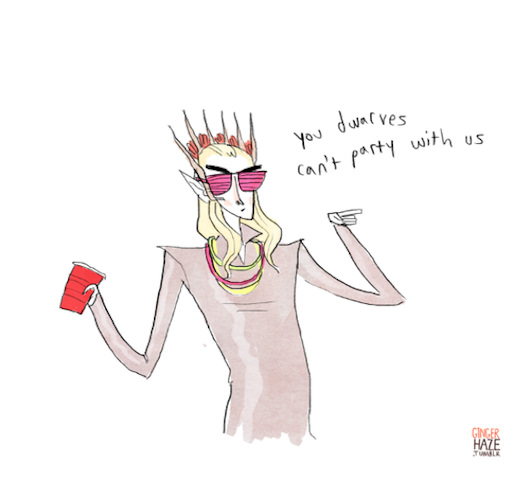 Crossovers are another fertile source of material. Tumblr is still amused by the reunion of Sherlock stars Martin Freeman and Benedict Cumberbatch, as Bilbo and the voice of Smaug. “Smauglock” jokes are still making the rounds. And then of course there's the “Mean Elves” parody video that mashs up The Hobbit with the most iconic quotes from Mean Girls.

Seventy-six years after the world was introduced to Bilbo Baggins, Tolkien's creation has a bigger audience than ever. Like a pop cultural little black dress, Middle-earth once again strikes a chord with the current zeitgeist. The story may have begun as the vision of a single man, but now it is the energy of dedicated fans, at laptop screens and behind the cameras, bringing it to new life.