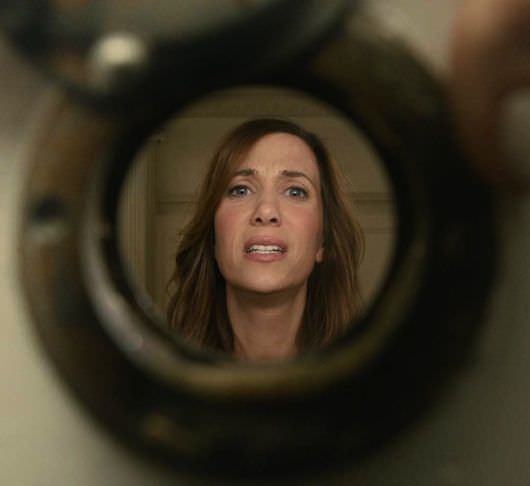 A background in documentary filmmaking came in handy for long-time co-directors Shari Springer Berman and Robert Pulcini when they needed to film a man in a mollusk-inspired exoskeleton on the busy streets of New York City.

“People are really scared off of [filming on a city street] without a lot of crew,” Berman told The Credits. For example, when 2007’s I Am Legend filmed a major sequence on the normally swarming streets of New York, the production had the manpower to shut down the Brooklyn Bridge and completely control pedestrian and vehicle traffic. But the directors knew Girl Most Likely (opening July 19), a tightly-budgeted new comedy that boasts Kristen Wiig in the lead role, couldn’t even “come close” to doing the same thing.

“Bob [Pulcini] and I were like, we’ll do it with a skeleton crew and let’s shoot it doc-style,” Berman said. “We actually had very few people. We dressed Chris Fitzgerald, who plays Ralph, up in the human shell, and we picked a few locations — Chinatown, Little Italy — no crowd control, nothing, just set him loose and put the camera in the most unobtrusive place and let’s just shoot. That’s how we got it.”

They planted a few actors for various scenes in the comical, dialogue-free sequence, but most of the background players are regular people who happened to be on the streets. Berman called it a “leap of faith” that they could shoot a scene as scripted without completely controlling the environment.

“But having come from docs, Bob and I were comfortable with that,” she added. “It’s not commonly done, but it’s a very invigorating experience.”

Girl Most Likely is about a failed Broadway playwright (Wiig) who has to make the awkward transition from the next big thing to moving back in with her family in New Jersey.

Berman and Pulcini, who married in 1994, first started working together on their student projects at Columbia University School of the Arts, and have since co-directed documentaries like Off the Menu: The Last Days of Chasen's (1997) as well as feature films such as 2003’s American Splendor, for which they also shared an Oscar nomination for Best Adapted Screenplay, and 2007’s The Nanny Diaries.

Although they say that co-directing is “normal” to them and “pretty uneventful” now — and Berman calls it a “wonderful” way to combine different strengths — they’ve set a few important rules along the way, such as dividing up communication so they don’t give conflicting notes — she talks to the actors; he talks to the Director of Photography — and trying not to argue in front of the cast and crew.

“You have to have a shared aesthetic, so if you disagree a lot, it would be pretty disastrous,” Berman noted. “We don’t always agree; we step aside, we excuse ourselves, and have a conversation out of earshot.”

Pulcini is also an award-winning editor who pulls triple duty (writer, director, editor) on many of their films. (Although Michelle Morgan wrote the screenplay for Girl Most Likely.)

“When we wrap, I become the editor and Shari becomes the director in the room. So I basically cut for her and take her notes,” Pulcini explained.

“I become his boss,” Berman joked.

“In a lot of ways she does become my boss,” Pulcini agreed. “I need someone to say yes, no, yes, no, because I’m too close. So she doesn’t really watch what I do until I present it, and then she gives me notes the way a director would give notes in the editing room. I really enjoy editing–really, for me, that’s the most fun.”

On-location shooting and Wiig’s schedule were two of the biggest challenges for this production. “She literally went from set to her first day on [her final season of] SNL,” Pulcini noted. “The clock was ticking to get it in the can.”

Girl Most Likely — which also stars Darren Criss, Matt Dillon, Annette Bening and Natasha Lyonne — is dedicated to New Jersey, where many shoreline locations were destroyed by Hurricane Sandy following the shoot.

“[The movie is] almost a snapshot of time that will never look like that again,” Berman said.

The Crew was briefly evacuated because of Hurricane Irene while filming in a basement on the Rockaway Peninsula, but the shoot concluded before the superstorm hit a year later. The narrative is set mostly in Ocean City, but they filmed in various locations around New Jersey, including Keansburg, as well as Long Beach and the Rockaways in Queens, all of which were devastated by Sandy.

“It’s definitely a love song for Jersey in a lot of ways,” according to Pulcini. A few characters insult the state in the script, but in the end: “Jersey triumphs.”