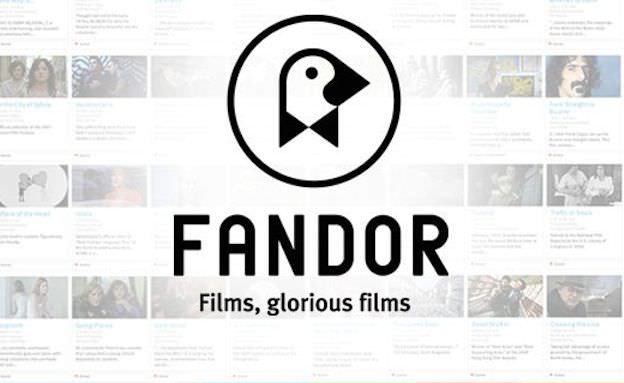 Streaming content services like Netflix, Hulu, HBOGo, and AmazonInstant have made the impossible plausible: we can now stream movies on our phones, iPads, and portable gaming devices in the most unlikely of places. Whether it’s watching The Wizard of Oz in the backseat of a taxi or Avatar on a leisurely gondola ride through the idyllic Venice canals—so long as you have a working Internet connection, the limitations of where, when, and how you view a movie is definitely a woe of the past.

So leave it to Fandor—one of the newest streaming services on the block—to sweeten the deal by paying filmmakers directly from every subscription dollar earned. And we’re not talking chump change: Fandor pays half of their subscription earnings forward to the brilliant hearts and minds behind the very films it streams.

While Netflix boasts a bevy of popular films, Hulu bears streaming network television, and HBOGo issues its own premium cable series and movies on demand, Fandor has a decidedly ‘indie’ bent. The service offers titles like the timelessly-controversial The Birth of a Nation to great documentaries like Who is Harry Neilson (And Why Is Everybody Talkin’ About Him?). Even Fandor’s masthead declares; “Most of our films fall outside mainstream channels and we love that, because there are plenty of places to watch those films online.”

Built by fans, for fans, Fandor takes a three-pronged approach to content streaming. The first? Organic exploration. For $10 a month, subscribers can peruse hundreds of films—some dating back to the 1890s spanning genres like “schlocky zombie musicals, forgotten noirs, chopsocky martial arts extravaganzas.” Next, members are encouraged to check out the ever-evolving in-house recommendations, and finally, to read Fandor’s movie lover’s blog, Keyframe for daily inspiration. From there, users can stream the movies they choose on their iPhone, iPad, or Roku device (users are also encouraged to suggest other compatible viewing devices).

"It’s our goal to help audiences find those film gems that they can’t find elsewhere; we’re all about curation and discovery," says Fandor founder Dan Aronson.

Fandor is one of many content-streaming services to launch in the past five years, proving that the medium has become as ubiquitous as cable. And as the sheer number of content-streaming platforms proliferate, so too will the niches they represent. An entirely non-objective survey of recent friends, for instance, evinced a smattering of streaming platform allegiances. An office colleague who lives for 30 Rock has a special affinity for Hulu, while an edgy friend who loves groundbreaking documentaries swears by SnagFilms. Finally, a third friend (who has an admittedly tough time in the decision-making department) loves his Roku device, which grants him access to several different streaming platforms in one place.

But convenience and choice aren’t the only assets streaming services bring to the table. They’ve also been steadfast in making sure they honor the films they stream, by respecting copyright licensing and delivering a safe and affordable way for film fans to watch the movies of their choice. For the consumers (read: fans), that means they can be sure the content they’re getting is without spamware or viruses—and, in Fandor’s case: that their money is going straight into the filmmaker’s pocket.

"Fandor aims to have an equal and open relationship with these filmmakers," Aronson says. We want to align our interests with filmmakers – we want them to succeed. Unlike many services, our payout is completely transparent. We pay filmmakers according to how many minutes of film is watched as well as the inclusion in our library. "

In the connected age, transparency reigns, and that means an increase in both attention and compensation for the many off-screen individuals who contribute to the making of a film. If you happened to have caught Taken 2 recently, you might have noticed a slate that appeared during the credits: “The making and legal distribution of this film supported over 16,000 jobs.” (h/t to our thoughtful Twitter follower, teamquentin, for bringing that to our attention).

This is all great news, not just for the filmmakers, but for the scores of fans who appreciate their work. As more services like Fandor seek to pay the film industry’s many creators and makers directly, fans can continue to reap the rewards of outstanding work by their favorite moviemakers, and find new favorites they never before knew existed.

"Every year, there are many wonderful films made around the world," Aronson says. "However, Hollywood budgets only allow for a handful of films to be distributed with extremely high traditional P&A marketing budgets. I saw a distribution & marketing gap…and the internet as a great solution to that problem.  "

That, of course, means more Brian Eno: The Man Who Fell to Earth on the bus, Nosferatu on your iPad, and if you happen to be so lucky, A Town Called Panic at a cobble-stone nestled coffee shop on Paris’ Left Bank. And when all else fails? You can always watch Two in the Wave – the awesome documentary about Jean-Luc Godard and Francois Truffaut – from the more familiar territory of your own bed.