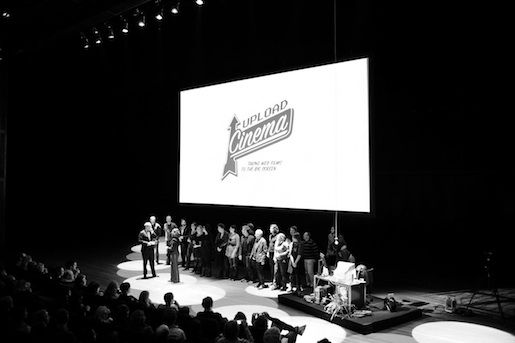 Surely, it’s happened to you: While watching a favorite flick at home, you suddenly realize that the laughs you found tear-inducing and stomach-ravaging in the theater are, on this solitary viewing at least, sadly amiss. What gives? According to an innovative Dutch start-up called Upload Cinema, not only are you missing out on the infectious and sporadic laugh-track of dozens of other moviegoers, you’re also missing out on the effervescent, hard-to-define ambiance of the traditional movie theater experience. Put simply: Films are simply better when we watch them together.

Sharing the movie-viewing experience is integral to Upload Cinema’s mission to ‘upload cinema in every city.’ Founded in 2008 by Dagan Cohen and Barbara de Wijn, it hosts bi-monthly get-togethers in which audiences can revel at a curated night of user-generated Internet videos. Here, your email inbox, social media newsfeeds and favorite online content sites are all game for viewing fodder. You might catch the latest viral sensation, revisit a favorite spoof or reflect upon a philosophical and experimental short—all the while accompanied by a theater full of fellow film lovers.

Upload Cinema is largely community driven and acts as a self-ascribed film club. Every two months, it sends out a call for submissions within a given theme (which have included topics like ‘Bad Endings,’ ‘Remixing the City,’ ‘NSFW,’ and the next event’s: ‘Super Nature’).  A curation ‘jury’ then selects their favorites videos, sourced entirely from audience submissions. The result: a 90-minute thematically linked showing of viral video offerings, from cult web series to buzz-worthy YouTube videos to obscure and homemade online videos—all projected onto the big screen.

This notion of a shared entertainment experience is becoming an increasingly ubiquitous trend. After all, the social media age has made it positively impossible not to know what your old grade-school classmates are currently listening to, watching, and “liking.” But deeper connections can often be elusive.

Of course movies are great on your iPad, but can it really hold a candle to watching The Strangers or The Hangover in an energetic crowded theater? Now imagine watching YouTube’s Double Rainbow or Boys—the newest parody of the HBO hit Girls—on a giant screen in a packed theater. There’s nothing like having dozens of audible cues—from gasps to laughs and screams—to help enhance the ambiance of movie watching and to allay feelings of techno-isolation as our screens get smaller, more portable, and more dispersive.

That might explain why there are scores of other computer-screen-to-big-screen outfits popping up. Pop Video recently released a device to transform iPhones into full screen projectors. WebTV and Rokus allow users to put streaming television and movie programs onto a bigger screen. And the Big Screen Little Screen Meetup in New York City hosts monthly large-scale viewings of some of the best in online video.

At the moment, you can only catch the Upload Cinema series in Europe, but it’s growing as rapidly as our content consumption. The series has garnered a handful of awards from major outlets including a Silver Lion from Cannes. And UC’s success suggests that the rift between ‘videos everywhere’ and traditional, shared viewing experiences need not be mutually exclusive. Projects like Upload Cinema are working to bring audiences together at their local cinemas, while keeping the entertainment up-to-the-minute and per request.