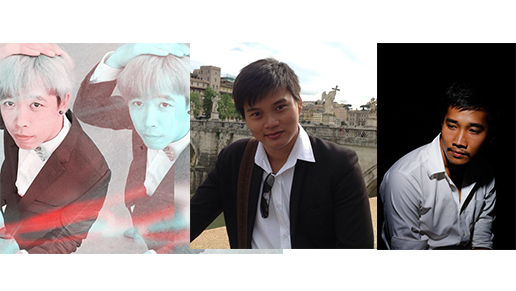 Next Generation of Vietnamese Filmmakers Share Career Plans and Dreams

Sharing global best practice production skills was the focus of a one-day Hanoi Spring 2015 Film Workshop hosted by the Motion Picture Association (MPA) and the Embassy of Denmark and held at L’Espace in Hanoi on March 17, completing a 10-day film production training course aimed at building knowledge and skill levels for Vietnam’s leading film producers.

Awards were presented to filmmakers competing in the feature film pitch competition, where filmmakers presented new feature film project ideas to a panel of local and international film industry judges. Read more about the film workshop.

Here, the three mostly-highly judged filmmakers – Le Bao, Do Quoc Trung and Tran Dung Thanh Huy – reflect on their approach to making films in Vietnam, and their recent experiences at the Hanoi Spring 2015 Film Workshop:

How did you make your start as a filmmaker?

After graduating from high school, I attended a course on multimedia and followed this with a short class on directing. I started filming by borrowing a camera from the training center to make documentaries about workers in Sai Gon. I also worked with my friends to make some art-house video clips at a small studio nearby my school. These experiences helped me on my way to making motion pictures and introduced me to the art of making movies and telling stories.

I came to motion pictures by fate when I was only 10. I was curious about the excitement and creativity surrounding a film crew. I decided to choose this art-form to share my own stories. My very first film was made for classmates with a cell phone. They were my first audience. I spent days in film libraries and thought about how to make movies. I submerged myself in wonderful movies. I sometimes got bad marks for other subjects at school, but I eventually realized that I wanted to become a filmmaker and those film libraries were my true school.

I happened to join a young director film course when I was 15. I soon realized that motion pictures was my love and I wanted to make movies.

What type of films do you want to be making for the cinema?

I want to tell my own stories about individuals that I find interesting. I am motivated neither by wanting to gain the respect of audiences who frequent art-house movies, nor because I want to show off. I am only interested in sharing the stories that I am obsessed about. These are simple stories about the pain that I’ve been through and I find I have the courage to share these stories through the art of motion pictures.

I am interested in making drama films with a strong dramatic narrative and full of life.

What influences you to make good films?

I am usually attracted to lonely individuals who have to somehow cope with the tragedy that befalls them. To me, they are very strong, sincere and full of life. I am curious about the problems they are facing and I want to find out what is happening in their minds.

I am attracted to stories from normal life – about the people that live and work around me in my society.

How did you enjoy the film workshop and what will you take away from your experiences during the training program?

To me, the most successful part of the film workshop was that it allowed all of the filmmakers from around Vietnam build relationships. It gave us the chance to share with each other the passion we have for our very first feature films, what excites us and urges us to make movies regardless of all the challenges that we are facing. And above all we see from others the deep understanding for what we do. Moving from short films to feature films is a very challenging step, and the film production knowledge shared during the film workshop provided us with valuable assets that we really need for the battle ahead.

The MPA film workshop gave me a totally fresh source of energy after a long time working alone on my script. I call this workshop an inspiring workshop, a spring workshop that gave us the courage to move forward full of hope.

I like the film workshop simply because it introduced me to a wide expanse of knowledge on independent film production that I’ve never been aware of. Most importantly, the film workshop helped our young filmmakers to work together and move forward.