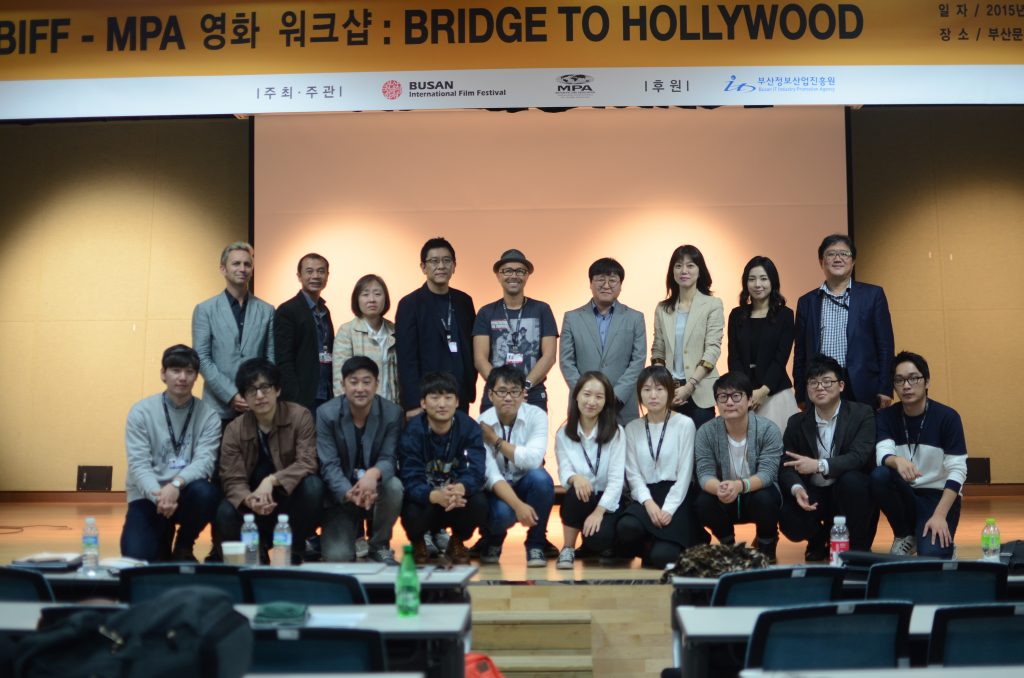 In October, the BIFF-MPA Film Workshop in Busan revealed some of Korea’s new generation of young filmmakers with new stories to tell and cinematic visions to share. Awards were presented to filmmakers competing in the feature film pitch competition, where they presented new feature film project ideas to a panel of local and international film industry judges. Read more about the film workshop here.

Here, three of the workshop participants – Lee Eun Sang, Lee Dong Eun and Kim Ji Won – reflect on their filmmaking journey so far, and their recent experiences at the BIFF-MPA Film Workshop.

Q: What made you want to be a filmmaker?

Lee Eun Sang: As an only child, my parents let me watch any movies I wanted to, so that I didn’t get bored by myself at home. As time passed, film became my lifelong friend and influenced me a lot. And then at some point, I was not content with just watching films anymore, so I started to make one.

Lee Dong Eun: I studied computer programing at university but I knew that I was more into literature. And then years later, I discovered film, which became the most attractive art form to me. It took a very long time for me to discover my dream.

Kim Ji Won: Ever since I was a little boy, I’ve been fascinated by the vivid images in films. I loved the fact that you are only limited by your imagination in film. When I was young, I dreamt of being a filmmaker just because I liked the movies, but now I realized that being a filmmaker is the best way to truly be myself and live my life.

Q: Can you tell us about some obstacles you’ve faced in your pursuit of a career in film?

Lee Eun Sang: No one can make a film alone. It always requires good talent and sound finance. Therefore the biggest difficulty is to raise the necessary capital to make a film.

Lee Dong Eun: Producing a film requires a lot of cooperation from your staff and tapping into networks. I need to know how to persuade people and have them involved in my project. Also, I believe that persuasion is key when it comes to raising the production fund, recruiting staff, casting the actors, securing shooting locations etc.

Q: As a filmmaker yourself, how do you think copyright infringing content affects a filmmaker’s career and the industry?

Lee Eun Sang: Films are made more profitable with diverse media and distribution channels. Films are distributed not only through theatrical windows and TV, but also DVD, digital cable, internet, etc. However, copyright infringement and illegal websites are damaging new channels and profits. Producing films requires more human resources and costs than producing any other content, so hope the copyright protection activities and policies can be continued and strongly supported. The perception of the value of intellectual property has greatly decreased due to the rapid development of the Internet and technology. I believe when consumers do not respect creators’ rights, their creative desire would decrease and this harms the development of the industry.

Lee Dong Eun: There are many filmmakers around me who want more opportunities. And so do I. The copyright infringement issue is too important to ignore. It harms the development of the film industry and if this is allowed to continue, great directors and creators would leave the film industry and eventually this adversely affects the consumers for they will miss out on quality content.

Kim Ji Won: I believe creating a work is like delivering a baby – there is life in every project and hard work is put into its creation. So stealing creative works is devastating to the creator. Also, returns from a project gives the creator a base on which to prepare the next project financially, but if someone takes it away illegally, it hurts the creators’ motivation, business and the entire industry.

Q: Did you enjoy the film workshop and what will you take away from your experiences during the program?

Lee Eun Sang: The BIFF-MPA Film Workshop was a great opportunity for me to share my thoughts and communicate with filmmaker friends and mentors. Also, I was so happy that I could show my ideas and scenarios to the people in advance and develop it with high quality advice. The mentoring allowed me to expand my horizons to think about filming for a global audience.

Lee Dong Eun: I have never had a chance to exchange opinions with international filmmakers before, so the BIFF-MPA Film Workshop was a very cherished opportunity. I believe the experience that I got mentoring from domestic and global filmmakers and also pitching my project in front of them would be a very valuable asset in my career.

Kim Ji Won: When I was younger, I used to study filmmaking alone. But, now I know that just working solo may not be beneficial. So, the BIFF-MPA Film Workshop was an inspiring experience because I could communicate with and be influenced by other filmmakers. Through this program, I thought about the film concepts more deeply, and the importance of pitching my project to the others. I might be too young and immature to get the answers yet, but at least I realize what to do taking my next step in my budding film career.